'Ministrokes' May Cause More Damage Than Thought 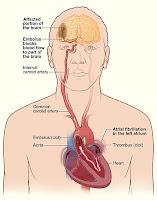 Common test given to patients after the passing attacks appears to miss some cognitive impairments.

SAN ANTONIO — As many as four in 10 people referred to a clinic with signs of a “ministroke” may have subtle cognitive damage that standard tests miss, a new study shows.

The findings, reported by Canadian researchers February 24 at the International Stroke Conference in San Antonio, Texas, suggest that after suffering the ministrokes many patients lose some ability to process abstract thoughts, reason things out and make quick calculations — what doctors call “executive function.”