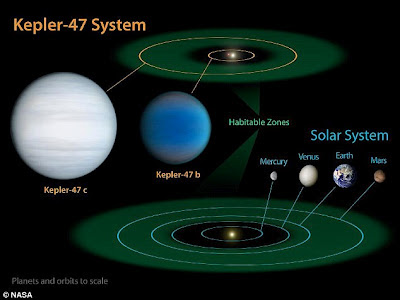 Two Planets ... Two Stars: Nasa Detects Strange New Solar System (And One Of The Planets Occupies The Life-Supporting 'Goldilocks Zone') -- Daily Mail
* First time that planets have been seen orbiting a two-star system
* 'Theorists will be going back to the drawing board to improve our understanding of how planets are assembled'

Nasa has announced the discovery of a solar system which is home to not one, but two stars.

The Kepler solar system, 4,900 light-years away from Earth, has two stars - called a binary system - orbiting each other in a cosmic dance.

What makes this discovery exciting is the discovery of two planets circling the system - and one of them inhabits the so-called 'Goldilocks Zone', where the planet is the right distance ('not too hot, not too cold') to support liquid water and potentially support life.

Before today, it was unknown whether planets could form around a two-star system.

How One U.S. Navy Captain Used A Creative Way To Provide For His Family If He Died

Stamp Auction
Neil Armstrong Couldn't Afford Life Insurance, So He Used A Creative Way To Provide For His Family If He Died -- Business Insider
After all the danger, glory, and fame it's easy to forget that at the end of the day astronauts are federal employees subject to the same General Schedule (GS) pay scale as everyone from typists to CIA agents.

My Comment: A small confession .... as a stamp collector, I would pay $5,000 for such a signed postcard.
Posted by War News Updates Editor at 8:00 AM No comments:

How Tall Can Buildings Get? 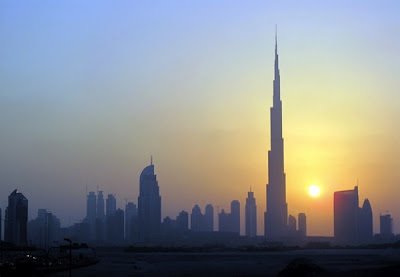 Is There a Limit to How Tall Buildings Can Get? -- The Atlantic
The race is always on. Within the span of just two years, the world's tallest building was built three times in New York City – the 282.5-meter Bank of Manhattan in 1930, the 319-meter Chrysler Building in a few months after, and then 11 months later the 381-meter Empire State Building in 1931. The era of architectural horse-racing and ego-boosting has only intensified in the decades since. In 2003, the 509-meter Taipei 101 unseated the 452-meter Petronas Towers in Kuala Lumpur after a seven-year reign as the world's tallest. In 2010, the Burj Khalifa in Dubai far surpassed Taipei 101, climbing up to 828 meters. Bold builders in China want to go 10 meters higher later this year with a 220-story pre-fab tower that can be constructed in a baffling 90 days. And then, in 2018, the Kingdom Tower in Jeddah, Saudi Arabia (below, right) will go significantly farther, with a proposed height of at least 1,000 meters.*

My Comment: It seems that money is the biggest limitation.

Posted by War News Updates Editor at 7:00 PM No comments:

Neil Armstrong, the first man to walk on the moon, has died at the age of 82, after suffering complications from heart surgery, his family said in a statement.

He famously uttered the quote moments after setting foot on the lunar surface: ‘That’s one small step for man, one giant leap for mankind.’

My Comment: After spending the past 2 days camping in the woods .... I fire up my computer to see what is happening in the world .... everything then becomes a blur except this story .... and then an overwhelming sense of loss knowing that something is now gone forever.

I was nine years old when I saw him walk on the moon .... becoming one of those grainy black and white childhood images that has always stuck with me. Over the years he then became the symbol (at least to me) of not what man is .... but what man is capable of doing .... and now he is gone and the world is a lesser place because of it. But I take comfort that even though he is gone .... as long as history books are written .... he will always be remembered as the first man to walk on a different celestial body .... and the first man to look at the earth from a perspective that no one had ever looked at before.