Yes, maggots are creepy, crawly, and slimy. But that slime is a remarkable healing balm, used by battlefield surgeons for centuries to close wounds.

Now, researchers say they’ve figured out how the fly larvae work their magic: They suppress our immune system. Maggots are efficient consumers of dead tissue. They munch on rotting flesh, leaving healthy tissue practically unscathed. Physicians in Napoleon’s army used the larvae to clean wounds. In World War I, American surgeon William Baer noticed that soldiers with maggot-infested gashes didn’t have the expected infection or swelling seen in other patients. The rise of penicillin in the 1940s made clinical maggots less useful, but they bounced back in the 1990s when antibiotic-resistant bacteria created a new demand for alternative treatments. In 2004, the U.S. Food and Drug Administration approved maggot therapy as a prescription treatment.

My Comment: I guess our ancestors knew what they were doing.
Posted by War News Updates Editor at 12:00 AM No comments:

New Views Of Earth At Night

Scientists unveiled the most detailed view of what the Earth looks like at night at a news conference at the American Geophysical Union meeting on Wednesday, Dec. 5. The unprecedented nighttime view of Earth's city lights is compiled from hundreds of images that come from a new NASA and NOAA satellite, called Suomi NPP. Suomi NPP is special because it's equipped with a new sensor, called VIIRS, that can capture images at night even without moonlight, distinguishing night lights with six times better spatial resolution and 250 times better resolution of lighting levels than before.


My Comment: An incredible video .... check it out.
Posted by War News Updates Editor at 12:00 AM No comments:

Making All Smartphones To Be Pocket Seismometers 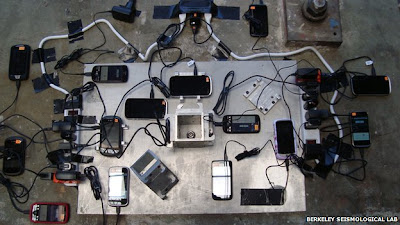 
Smartphones To Be Pocket Seismometers -- BBC

The smartphones in our pockets are about to get even smarter. Scientists want these ubiquitous gadgets to be put to work helping them detect and investigate earthquakes. The devices contain accelerometers and a team at the Berkeley Seismic Laboratory says the mechanisms are capable of monitoring tremors. An app is being developed that will record the shaking during major events and then report the data back to a central server over the cell network. The high numbers of smartphones now in circulation mean researchers could get very detailed information on who felt what, and where.
Read more ....

My Comment: This is smart .... and one that millions can easily contribute to.
Posted by War News Updates Editor at 12:00 AM No comments:

Volvo Develops The 'No Death' Car

Volvo Develops The 'No Death' Car: Vehicles Which Drive Themselves And Are Totally Crashproof Could Be On British Roads In Eight Years -- Daily Mail

Car giant Volvo is developing 'no death' cars that drive themselves and are impossible to crash – ready for launch in showrooms within eight years. The computerised vehicles will be fitted with high-tech sensors and will 'refuse to be steered' into other objects. Volvo says they will be on sale to customers by 2020, but that some of the life-saving technology will be incorporated into its vehicles even earlier – from 2014 – it says.

My Comment: I am not convinced .... I will need to keep my hands on the steering wheel.
Posted by War News Updates Editor at 6:00 PM No comments:

Inside An Amazon Warehouse (Pics) 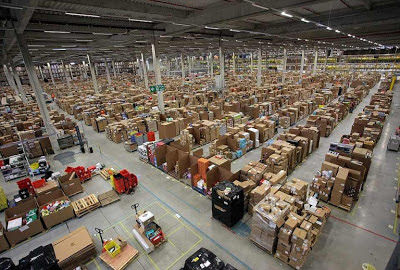 CSN Editor: The link is here. What's my take .... impressive.
Posted by War News Updates Editor at 5:00 PM No comments:

The Trend Of Building Glass Houses

A growing number of city dwellers are building glass houses—just a stone's throw from the street. Such homes allow in lots of light, but also curious looks from passersby; beware neighbors brandishing telescopes.

Every so often, Grant Risdon looks out his living room window and sees a stranger staring up at him, waving. Mr. Risdon isn't a celebrity—he is a consultant at a biotechnology company. But his house has a very public persona: Its second floor is almost entirely encased in glass, making it look like a transparent box floating above the more traditional homes in a densely populated Seattle neighborhood.

Mr. Risdon says he wanted to feel connected to the outside but didn't want to leave the city. He says he and his wife don't use blinds—even at night. "I don't feel exposed. I don't worry about it. We have nothing to hide," Mr. Risdon says.

My Comment: If privacy is not your thing .... I guess this is for you.
Posted by War News Updates Editor at 4:00 PM No comments:

The Future For Drones Is 'Small'

Four years ago, iRobot co-founder Helen Greiner stepped down from the company she helped turn into an all-important supplier of the military’s growing arsenal of ground robots. Now today, she’s unveiled the first ‘bots to roll off her new company’s assembly line. What are they? Teeny tiny hovering drones, designed to fly through your window and spy on you. That’s just one of two robots revealed so far from Massachusetts company CyPhy Works, founded by Greiner after leaving iRobot. We’ve also now got a sense of what Greiner’s been developing for the past couple of years.

My Comment: I concur .... I can easily foresee the day when these drones are being used by soldiers to scout ahead, check buildings/rooms, and monitor threats.
Posted by War News Updates Editor at 6:00 PM No comments:

A The Bugatti Veyron Covered With Mathematical Equations

* 252mph car was customised by French artist Bernar Venet
* Both the bodywork and interior are decorated with complex formulae
* The Bugatti is a one-off version of the standard £1.5m Veyron, and is currently on display in a Miami museum

It is one of the world's fastest supercars, with a 252mph top speed that leaves rivals trailing in its wake. And now Italian car manufacturer Bugatti has revealed the science behind the Veyron's astonishing top speed by covering the car in the sums used to power it. Conceptual artist Bernar Venet was asked by Bugatti to create his own design for the £1.5million Grand Sport model.