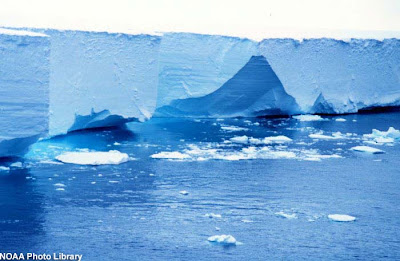 Antarctica's Ross Ice Shelf, like many of the fringes of the Antarctic continent, floats. That makes it fragile compared to ice on the continent, and this is where icebergs break off in a process called calving. Credit: Michael Van Woert, NOAA NESDIS, ORA
From Live Science:

Recent news of mammoth icebergs the size of small U.S. states breaking off Antarctica may sound dire. But those events mostly represent business as usual at the world's southernmost continent, scientists say.

A massive iceberg the size of the state of Rhode Island collided with Antarctica's Mertz Glacier in mid-February, and caused a huge new iceberg with an estimated mass of 860 billion metric tons to break off the glacial tongue. Scientists note that such dramatic examples have not been uncommon over the past decade.