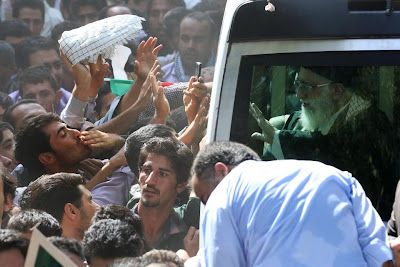 Iranians Can't Use Facebook, But Ayatollah Does -- NBC News

Facebook — banned in Iran due to its use by activists to rally government opponents in 2009 — has an unlikely new member: Supreme Leader Ayatollah Ali Khamenei. Launched a few days ago, the Facebook page "Khamenei.ir" displays photographs of the 73-year-old cleric alongside speeches and pronouncements by the man who wields ultimate power in the Islamic Republic. While there are several other Facebook pages already devoted to Khamenei, the new one — whose number of "likes" quadrupled on Monday to over 1,000 — appeared to be officially authorized, rather than merely the work of admirers.

My Comment: I doubt that he is posting himself .... someone on his staff is probably doing this. but it is interesting that he feels that he needs an online presence for the international community to read and follow. More proof (once agaion) on the power of social media.