US Soldiers Will Soon Be Able To See Through Concrete Walls

Researchers at the Massachusetts Institute of Technology are developing an experimental radar system that will allow U.S. troops in combat to see through walls.

The researchers’ device is an unassuming array of antenna in two rows — eight receiving elements on top, 13 transmitting ones below — and some computing equipment, all mounted onto a movable cart. But project leader Gregory Charvat and his team believe the technology could have powerful implications for “urban combat situations.” 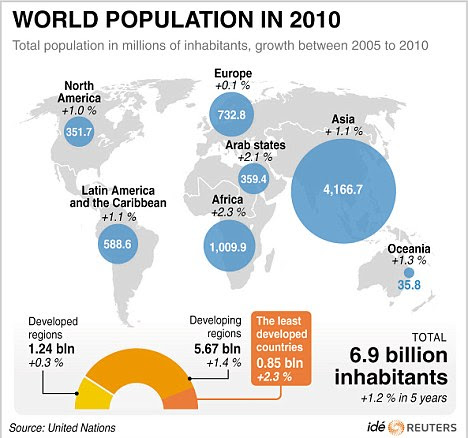 Room For One More? World Population To Reach 7 BILLION In Next Few Days -- Daily Mail
* Children most likely to be born in Asia-Pacific region
* Fears over pressure on food supply and medical care

The world's population looks set to smash through the seven billion barrier in the next few days, according to the United Nations.

It comes just 12 years since the total reached six billion - with official estimates saying the figure will top eight billion in 2025 and 10 billion before the end of the century.

And it is most likely the baby will be born in the Asia-Pacific region - where the population growth rate is higher than anywhere else in the world.

My Comment: Will more people mean more unrest and more wars .... hmmm ....we are going to find out in the next decade or two.
Posted by War News Updates Editor at 8:00 AM No comments: