A Chinese Cyber Attack Against Japan?

Japan's parliament building in Tokyo Photo: REUTERS
Japan Parliament Hit By China-Based Cyber Attack -- The Telegraph
Computers in Japan's lower house of parliament were hit by cyber-attacks from a server based in China that left information exposed for at least a month, according to reports.

Passwords and other information could have been compromised in the attacks, which began in July but were not reported to security authorities until the end of August, the Asahi Shimbun said, without citing sources.

Osamu Fujimara, Japan's government top spokesman, chief cabinet secretary and a lower house member, said he was not previously aware of the reported attack but that the government was investigating the issue.

The Trends And Impact Of Population Growth 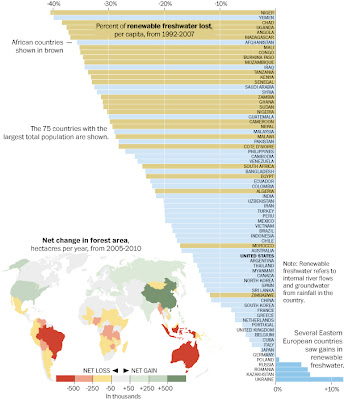 (Click on Image to Enlarge)
Sources: World Bank; U.N. Food and Agriculture Organization, U.N. Global Forest Resources Assessment, 2010. Graphic: Dan Keating and Bill Webster/The Washington Post. Published on October 23, 2011, 8:55 p.m.
Population Growth Taxing Planet’s Resources -- Washington Post
Humans have mined resources from the remote and rocky coast of Peru and Chile for more than a century and a half, gathering the guano deposits of seabirds for fertilizer and gunpowder. Those seabirds flourished on anchoveta in the coastal waters, while Peruvians in the highlands ate the same fish as dried snacks.

Now fishing vessels haul 7.5 million tons of the small silvery fish out of the water every year. Almost all the catch is reduced to fish oil and fish meal, which is fed to pigs, poultry and salmon being raised thousands of miles away to satisfy demand in the industrialized and rapidly-growing developing world.