A Look At Cyberwarfare And Hackers From A Russian Perspective 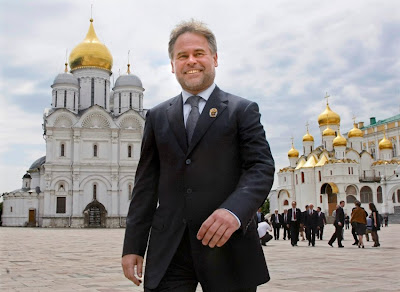 Evgeny Kaspersky was trained as a cryptologist and went on to co-found Kapersky Labs, which makes antivirus, anti-spyware, anti-spam and other online security products. In a recent SPIEGEL interview, he discussed a number of what he sees as worrying trends in cyber security. Regarding the new era of cyber war, he stated: "This war can't be won; it only has perpetrators and victims. Out there, all we can do is prevent everything from spinning out of control. Only two things could solve this for good, and both of them are undesirable: to ban computers -- or people." Sergei Chirikov/ AFP/ Getty Images
'I Fear the Net Will Soon Become a War Zone'. An Interview With Anti-Virus Pioneer Evgeny Kaspersky -- Spiegel Online
Evgeny Kaspersky is one of Russia's top Internet virus hunters and IT entrepreneurs. In a SPIEGEL interview, he discusses a raft of recent hacker attacks on multinationals, the "total professionals" behind the Stuxnet virus and his fear of both personal and widespread cyber violence.

My Comment: I love interviews like this one, and this from Spiegel does not disappoint. On a side note, the Independent has an excellent story on the secret world of hackers and the anarchy that they can unleash on the web. That link is here.
Posted by War News Updates Editor at 7:01 AM No comments: