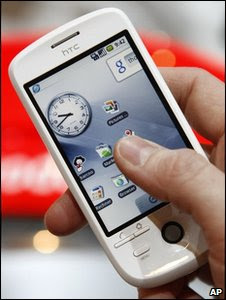 Photo: HTC was the first manufacturer to use Android in its phones

Apple's legal action against HTC may have "wider implications" for all phone makers using Google's Android operating system, an analyst has warned.

Ian Fogg of Forrester Research said that the case against HTC, in which Apple alleges infringement of 20 of its patents, could be the first of many.

Although Apple has not named Google in the suits, many of the named patents relate to operating system processes.