Military’s Mach 5 Missile Fails, Again -- Danger Room
A crucial test for the Air Force’s experimental Mach 5 missile has ended in failure, according to the Air Force. Tuesday’s test is also the third time the hypersonic X-51A Waverider cruise missile has fallen short. But this time could be the last.

As first reported by Danger Room, the Waverider’s control fin failed, preventing the missile’s scramjet engine from starting. The Air Force later confirmed the result in a statement. That also corresponds to information provided by an insider familiar with the test, who said a problem with a missile’s fin caused a loss of control before the engine could kick in. 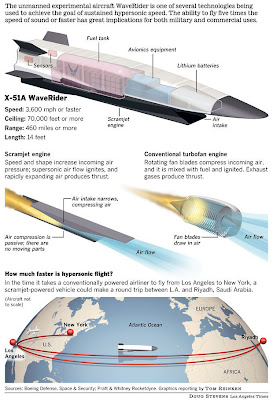 (Click on Image to Enlarge)
Key Test Set For Sustained Hypersonic Flight -- L.A. Times
The unmanned experimental aircraft X-51A WaveRider is expected to fly above the Pacific Ocean near Point Mugu at Mach 6 for 300 seconds Tuesday.

Since test pilot Chuck Yeager broke the sound barrier in 1947, engineers and scientists have dreamed of ever-faster aircraft. Now, they face one of their toughest challenges yet: sustaining hypersonic flight — going five times the speed of sound or more — for more than a few minutes.

In a nondescript hangar at Edwards Air Force Base in the Mojave Desert, a team of aerospace engineers has been putting the finishing touches on a lightning-quick experimental aircraft designed to fly above the Pacific Ocean at 3,600 mph. A passenger aircraft traveling at that speed could fly from Los Angeles to New York in 46 minutes.

Update: Tomorrow's Test Of The X-51 Waverider Could Usher In A New Era Of Flight -- Business Insider