A Second Oval Office For The President? 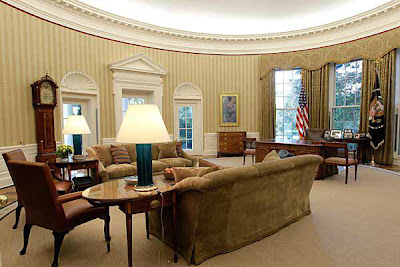 This summer there will be two Oval Offices in the White House complex, and it won’t be a case of double vision. In preparation for a major, two-year renovation of the West Wing, the government is undertaking extensive work to complete a new executive office for President Obama at the south end of the adjacent Eisenhower Executive Office Building, RCP has learned.

The president’s facsimile Oval Office, created as a nearly identical replica of the most famous ovoid room in the world, is slated to be ready for occupancy by August if Obama is ready to move and if design challenges are resolved. The build-out of the new “West Wing quarters” inside the Eisenhower building has begun, but unforeseen construction hurdles may alter plans for the eventual placement of the new office inside the EEOB, according to several knowledgeable sources.

My Comment: There can only be one Oval Office .... the other office may look like it .... but it does not have it's history .... it is just a replica.
Posted by War News Updates Editor at 1:00 AM No comments:

"It Broke Up! The Shuttle Broke Up!": Remembering Columbia -- CBS News

As some might reckon it, the beginning of the end for NASA's space shuttle program came 10 years ago Friday, at 8:48:39 a.m. EST on Saturday, Feb. 1, 2003. That's when strain gauge V12G9921A, a sensor in the shuttle Columbia's left wing, began registering a small but unusual increase in stress as the spaceplane descended from orbit to close out its 28th mission.

Twenty seconds later, a temperature sensor followed suit. Over the next few minutes, a shuttle data recorder captured a cascade of alarming sensor readings and failures on the left side of the spacecraft that clearly indicated a rapidly unfolding catastrophe.

A New Test For Pancreatic Cancer?

A 15-year-old schoolboy could save millions of lives after he invented a new, low-cost test that can detect the early stages of a deadly form of cancer.

Jack Andraka from Crownsville, Maryland, developed a simple dip-stick test for levels of mesothelin, a biomarker for early stage pancreatic cancer found in blood and urine.

It promises to revolutionise treatment of the disease, which currently kills 19 out of 20 sufferers after five years - largely because its so difficult to detect until its final stages.

My Comment: I am sure that before being available to the public that more testing will need to be done. Let's keep our fingers crossed that this is a breakthrough..
Posted by War News Updates Editor at 2:00 AM No comments: 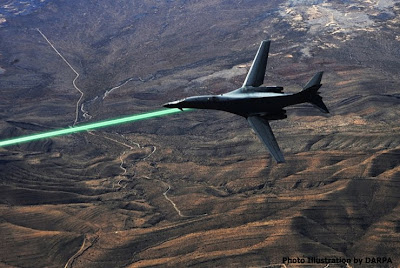 Our first foray into laser-equipped combat aircraft was the Airborne Laser Testbed, a Boeing 747 with a gigantic chemically-pumped megawatt laser turret in its nose. It was pretty awesome from a conceptual standpoint, but it didn't work very well, and was scrapped last year.

This doesn't mean that the idea of high-powered lasers on aircraft doesn't make a lot of sense, and DARPA is still for ways to make it work. It's working on two at the moment: the High Energy Liquid Laser Area Defense System (HELLADS), and Aero-Adaptive/Aero-Optic Beam Control (ABC).

US Military Will Install Laser Turrets on Bombers and Fighter Jets -- Gizmodo
U.S. fighter jets to use Star Wars-style onboard laser weapons by 2014 -- Science Recorder
DARPA plans to put laser turrets on fighter jets in 2014 -- Slash Gear
Pentagon wants laser weapons on fighter jets -- TG Daily
The Pentagon Plans To Test More Airborne Laser Weapons As Soon As Next Year -- Popular Science Lasers on planes to be tested by US military -- Global Post
Posted by War News Updates Editor at 1:00 AM No comments: 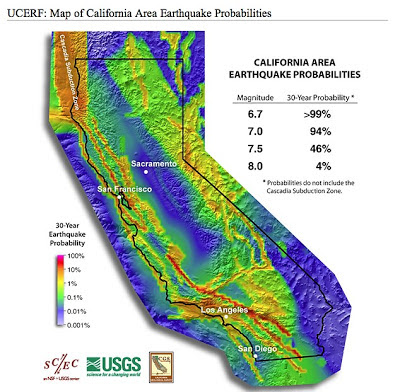 The California area's probability of suffering an earthquake

* System will use 2,000 sensors already in place to look for 'p-waves', precursors to earthquakes
* Will provide 60 second warning, giving residents 'critical seconds' to prepare
* U.S. Geological Survey predicts a 99 percent chance of a magnitude-6.7 earthquake or larger in the next 30 years in California Plans for an £50 million ($80m)

Earthquake early warning system for California have been unveiled.

The ShakeAlert system, which has taken ten years to develop, would give a minute's warning of a major quake.

Experts say this would give residents critical time for residents to 'duck and cover' and for utilities to power down.

My Comment: The above image is one of the best maps on the area's probability of suffering an earthquake that I seen in a long time.
Posted by War News Updates Editor at 12:00 AM No comments: 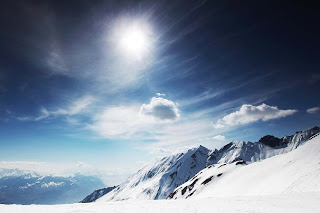 After the planet’s average surface temperature rose through the 1990s, the increase has almost leveled off at the level of 2000, while ocean water temperature has also stabilized, the Research Council of Norway said in a statement on its website.

After applying data from the past decade, the results showed temperatures may rise 1.9 degrees Celsius if Co2 levels double by 2050, below the 3 degrees predicted by the Intergovernmental Panel on Climate Change. “The Earth’s mean temperature rose sharply during the 1990s,” said Terje Berntsen, a professor at the University of Oslo who worked on the study. “This may have caused us to overestimate climate sensitivity.”

My Comment: Ooopppsss ....
Posted by War News Updates Editor at 4:00 AM No comments:

US Soldier Who Lost All Limbs Undergoes Successful Double-Arm Transplant

(CNN) -- A U.S. Army infantryman who lost all four limbs in a 2009 roadside explosion in Iraq has undergone radical transplant surgery that may help him regain use of his arms. Last month, the 26-year-old infantryman had successful surgery -- a rare double arm transplant -- at Johns Hopkins Hospital in Baltimore.

"It feels amazing," Marrocco told reporters Wednesday. "It is something that I was waiting for for a long time, and now that it happened, I don't know what to say, because it is such a big thing for my life." The last thing Marrocco remembers before being hit by an explosion in 2009 was that he was driving an armored vehicle.

My Comment: It is amazing on what science is capable of doing right now.
Posted by War News Updates Editor at 2:00 AM No comments: 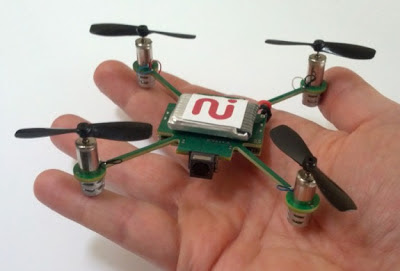 
Tiny Robot Helicopter Will Follow You Around, Filming Everything You Do -- Smithsonian

Do you want to obsessively share every detail of your life with everyone you know? Maybe you spend so much time playing video games that you would really just feel more comfortable having a third-person perspective on your own life?

Maybe, you’re really short and just want to know what’s going on around you. Whatever the case may be, advances in technology have now brought our society to the point where you will soon be able to buy a tiny little camera-equipped robot helicopter that will automatically follow you around and film every single thing you do.

My Comment: This technology is getting smaller and smaller with each passing day.
Posted by War News Updates Editor at 1:00 AM No comments: 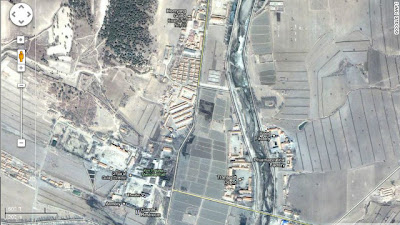 Map of Camp 22 shows previously unidentified structures -- such as guards compounds or the office of director.

(CNN) -- Ever wondered how to drive from the center of Pyongyang, the showcase capital of North Korea, to Yongbyon, the location of the secretive regime's main nuclear complex? Well, a recent update to Google Maps has the answer for you.

It has filled in the big, largely blank space that previously lay north of the well-mapped South Korea with streets, towns and landmarks. Users curious to virtually explore one of the world's most reclusive states can zoom into the heart of Pyongyang and pull up photographs of the Kumsusan Memorial Palace, which houses the bodies of the revered former leaders Kim Il Sung and Kim Jong Il.