Life Expectancy 2011 Estimates CIA World Factbook
What's Killing America? U.S. Ranks 28th In Life Expectancy (Lower Than Chile And Greece) While It Pays The MOST For Health Care -- Daily Mail
A new survey on health care is revealing that you may not be getting what you pay for if you check into a U.S. hospital.

The U.S. healthcare system is more effective at delivering high costs than quality care than other developed nations, according to the study, conducted by the Organization for Economic Cooperation and Development, or OECD.

It found first-rate treatment for cancer but insufficient primary care for other ailments.

The Construction of NASA's Next Mars Rover

This artist's concept depicts the rover Curiosity, of NASA's Mars Science Laboratory mission, as it uses its Chemistry and Camera (ChemCam) instrument to investigate the composition of a rock surface. ChemCam fires laser pulses at a target and views the resulting spark with a telescope and spectrometers to identify chemical elements. The laser is actually in an invisible infrared wavelength, but is shown here as visible red light for purposes of illustration. Source: NASA/JPL-Caltech
Inside Look: The Construction of NASA's Next Mars Rover -- FOX News
In May 2011, SPACE.com reporter Mike Wall visited NASA's Jet Propulsion Laboratory in Pasadena, Calif., as scientists and engineers were wrapping up work on Curiosity, NASA's next Mars rover. This is his account.

It could be a scene from a James Bond film — a glimpse into the archvillain's lair.

Anonymous white-clad workers, their faces obscured by surgical masks, cross a cavernous, high-ceilinged room. They pause to adjust or inspect large pieces of mysterious equipment, some of which is spangled with bright gold foil. It's obvious that they're building something complicated and important. 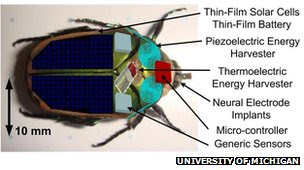 Image: The research team proposed putting two spiral energy harvesters on either side of a beetle's thorax.

Cyborg Search-And-Rescue Insects' Power Source Unveiled -- BBC
Efforts to create an army of cyborg insects are being pursued by a team of US-based engineers.

The group is investigating ways to harvest energy from the creatures to power sensors and other equipment fastened to their bodies.

The team has created an energy scavenging device that is attached close to the insects' wings.

It suggested the creatures might one day be used to aid search-and-rescue operations and surveillance.

The University of Michigan team of engineers published their study in the Journal of Micromechanics and Microengineering.

Uh Oh, Global Warming Loons: Here Comes Climategate II! -- The Telegraph
Breaking news: two years after the Climategate, a further batch of emails has been leaked onto the internet by a person – or persons – unknown. And as before, they show the "scientists" at the heart of the Man-Made Global Warming industry in a most unflattering light. Michael Mann, Phil Jones, Ben Santer, Tom Wigley, Kevin Trenberth, Keith Briffa – all your favourite Climategate characters are here, once again caught red-handed in a series of emails exaggerating the extent of Anthropogenic Global Warming, while privately admitting to one another that the evidence is nowhere near as a strong as they'd like it to be.

My Comment: The BBC reporter in his post is clearly not amused with this additional release of emails .... not a surprise considering the embarrassing nature of its content and the BBC's agenda of promoting the science behind climate change.
Posted by War News Updates Editor at 10:00 AM No comments: