MINOS Experiment Far Detector NuMI/Fermilab
Fermilab Will Double-Check CERN's Revolutionary Faster-Than-Light Claim -- Popular Science
So far, the only thing moving faster than light is speculation. But in the wake of last week’s baffling neutrino news out of CERN, physicists are crunching numbers to test whether these ghostly particles really can move faster than photons. Physicists at Fermilab are re-examining some old data to help answer the question.

The development of such a device, described as an 'antimagnet', could offer many beneficial applications, such as protecting a ship's hull from mines designed to detonate when a magnetic field is detected, or allowing patients with pacemakers or cochlear implants to use medical equipment.

How Asia Was Settled By Man 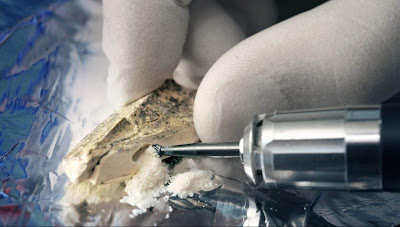 To extract DNA from a fossilized bone, researchers extract material using a dentistry drill. (Credit: Image courtesy of the National Science Foundation)
Asia Was Settled in Multiple Waves of Migration, DNA Study Suggests -- Science Daily
ScienceDaily (Sep. 26, 2011) — An international team of researchers studying DNA patterns from modern and archaic humans has uncovered new clues about the movement and intermixing of populations more than 40,000 years ago in Asia.

Using state-of-the-art genome analysis methods, scientists from Harvard Medical School and the Max Planck Institute for Evolutionary Anthropology in Leipzig, Germany, have found that Denisovans -- a recently identified group of archaic humans whose DNA was extracted last year from a finger bone excavated in Siberia -- contributed DNA not just to present-day New Guineans, but also to aboriginal Australian and Philippine populations.

Posted by War News Updates Editor at 11:59 AM No comments:

Most Polluted Cities In The World

Iranian cities have some of the worst pollution in the world, with fine particle presence 20 times higher than the recommended upper limit. Photograph: Vahid Salemi/AP
Iran, India, Pakistan And Mongolia Have Most Polluted Cities In The World -- The Guardian
World Health Organisation's first global survey of fine particle pollutants says US and Canadian towns are among cleanest

Cities in Iran, India, Pakistan and Mongolia are among the worst on the planet for air pollution, while those in the US and Canada are among the best, according to the first global survey.

The Iranian city of Ahvaz had the distinction of the highest measured level of airborne particles smaller than 10 micrometres, according to the UN's World Health Organisation (WHO) survey.