Job Cuts At The US Space Shuttle Program 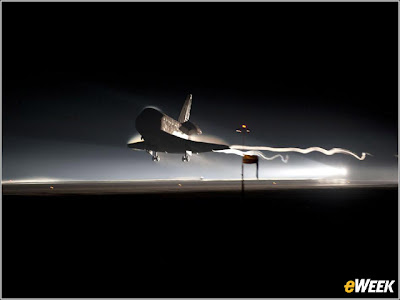 NASA Reducing Space Shuttle Workforce From 6,700 to 1,000 -- PC World
The landing of the Space Shuttle Atlantis and the official ending of NASA's 30-year space shuttle program marked a bittersweet moment for the 6,700-some shuttle workers tasked with maintaining the space-faring fleet.

NASA began issuing the first of its layoff notices for approximately 3,200 contract workers Friday, the first in a series of cuts scheduled to occur between now and August. NASA plans to drop down to a shuttle de-servicing staff of around 1,000 workers, which will be tasked with prepping the three main shuttles for their new homes in museums around the country.

My Comment: Remembering the US shuttle program.
Posted by War News Updates Editor at 8:00 PM No comments:

Research centre: Warwick University has been growing animal human hybrids over the last three years
150 Human Animal Hybrids Grown In UK Labs: Embryos Have Been Produced Secretively For The Past Three Years -- The Daily Mail
Scientists have created more than 150 human-animal hybrid embryos in British laboratories.

The hybrids have been produced secretively over the past three years by researchers looking into possible cures for a wide range of diseases.

The revelation comes just a day after a committee of scientists warned of a nightmare ‘Planet of the Apes’ scenario in which work on human-animal creations goes too far.

The Northern Calcareous Alps, where scientists found evidence of a giant, killing "burp" of methane emitted hundreds of millions of years ago.
From FOX News:

A massive, long-ago extinction was once thought to have been caused by a destructive wave of volcanic activity. Scientists now point their fingers at another culprit.

Micha Ruhl and researchers from the Nordic Center for Earth Evolution at the University of Copenhagen in Denmark have found that the mass extinction of half of Earth’s marine life over 200 million years ago was likely the result of a giant release of carbon methane in the atmosphere.