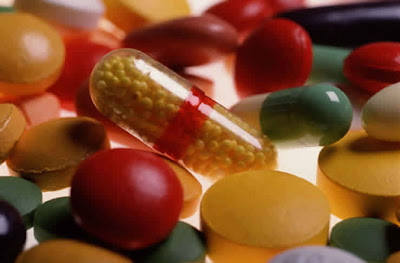 erome Groopman has a good article in The New Yorker surveying the growing threat of antibiotic-resistant bacteria.

Of the so-called superbugs—those bacteria that have developed immunity to a wide number of antibiotics—the methicillin-resistant Staphylococcus aureus, or MRSA, is the most well known. Dr. Robert Moellering, a professor at Harvard Medical School, a past president of the Infectious Diseases Society of America, and a leading expert on antibiotic resistance, pointed out that MRSA, like Klebsiella, originally occurred in I.C.U.s, especially among patients who had undergone major surgery. “Until about ten years ago,” Moellering told me, “virtually all cases of MRSA were either in hospitals or nursing homes. In the hospital setting, they cause wound infections after surgery, pneumonias, and bloodstream infections from indwelling catheters. But they can cause a variety of other infections, all the way to bacterial meningitis.” The first deaths from MRSA in community settings, reported at the end of the nineteen-nineties, were among children in North Dakota and Minnesota. “And then it started showing up in men who have sex with men,” Moellering said. “Soon, it began to be spread in prisons among the prisoners. Now we see it in a whole bunch of other populations.” An outbreak among the St. Louis Rams football team, passed on through shared equipment, particularly affected the team’s linemen; artificial turf, which causes skin abrasions that are prone to infection, exacerbated the problem. Other outbreaks were reported among insular religious groups in rural New York; Hurricane Katrina evacuees; and illegal tattoo recipients. “And now it’s basically everybody,” Moellering said. The deadly toxin produced by the strain of MRSA found in U.S. communities, Panton-Valentine leukocidin, is thought to destroy the membranes of white blood cells, damaging the body’s primary defense against the microbe. In 2006, the Centers for Disease Control and Prevention recorded some nineteen thousand deaths and a hundred and five thousand infections from MRSA.

NASA, Scientists Not Ready to Give Up on Martian Life 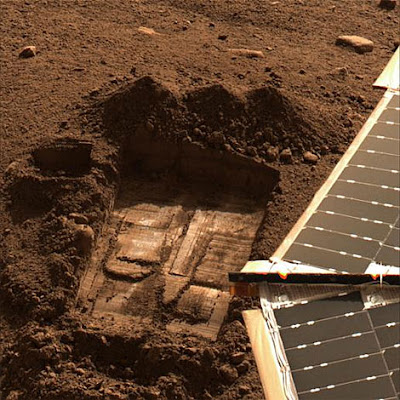 Despite today’s findings of toxic perchlorate in Martian soil, NASA is not ready to write off life on Mars; leading space scientists point to earthbound extremeophiles that process the substance.

Less than a week after NASA announced that its Phoenix Lander has positively identified water on Mars, the agency today dampened enthusiasm for the search for Martian life by announcing the probe has found a toxic chemical that is not friendly to life. Although media leaks of today's announcement started the buzz on indications that life could not exist on the planet, scientists inside and out of the Phoenix program hold out hope that Mars could still harbor organisms.

NASA's announcement this afternoon detailed the presence of a highly oxidizing substance called perchlorate in the planet's soil­—making Martian life a long shot because the highly reactive salt would break down organic compounds. Samples of Martian soil containing perchlorate have been tested in two labs on the Phoenix Mars Lander: the Microscopy, Electrochemistry and Conductivity Analyzer (MECA) and the Thermal and Evolved-Gas Analyzer (TEGA). NASA is now ready to report the results from both machines. 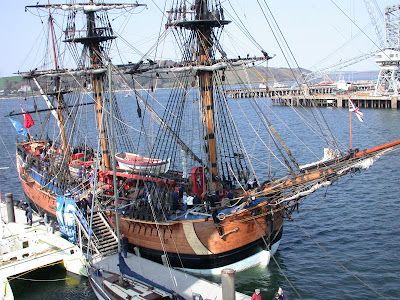 Britain's great seafaring tradition is to provide a unique insight into modern climate change, thanks to thousands of Royal Navy logbooks that have survived from the 17th century onwards.

The logbooks kept by every naval ship, ranging from Nelson’s Victory and Cook’s Endeavour down to the humblest frigate, are emerging as one of the world’s best sources for long-term weather data. The discovery has been made by a group of British academics and Met Office scientists who are seeking new ways to plot historic changes in climate.

“This is a treasure trove,” said Dr Sam Willis, a maritime historian and author who is affiliated with Exeter University’s Centre for Maritime Historical Studies.

“Ships’ officers recorded air pressure, wind strength, air and sea temperature and other weather conditions. From those records scientists can build a detailed picture of past weather and climate.”

The Coolest Machine Ever?

The Large Hadron Collider (LHC) is set to begin operating this year to test the validity and limitations of the Standard Model. (Among the questions: Where has all the anti-matter gone? Does the Higgs boson exist?) The collider is currently being cooled to its operating temperature of 1.9K, which is pretty darn cold. Here are some great pictures from Boston.com of this huge, awesome machine, located in Switzerland and France.

The music video above by science writer Kate McAlpine tries to put the LHC’s mission into layman’s terms. The LHC should be pretty cool — at least if it doesn’t destroy the universe. (HT’s: LGF, LHC Blog)
Posted by War News Updates Editor at 2:22 PM No comments:

Why Coffee Is Good For You 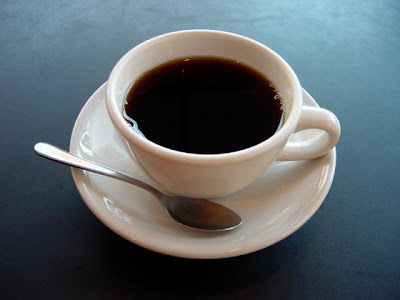 Sorting Out Coffee’s Contradictions -- New York Times
When Howard D. Schultz in 1985 founded the company that would become the wildly successful Starbucks chain, no financial adviser had to tell him that coffee was America’s leading beverage and caffeine its most widely used drug. The millions of customers who flock to Starbucks to order a double espresso, latte or coffee grande attest daily to his assessment of American passions.

Although the company might have overestimated consumer willingness to spend up to $4 for a cup of coffee — it recently announced that it would close hundreds of underperforming stores — scores of imitators that now sell coffee, tea and other products laced with caffeine reflect a society determined to run hard on as little sleep as possible.

But as with any product used to excess, consumers often wonder about the health consequences. And researchers readily oblige. Hardly a month goes by without a report that hails coffee, tea or caffeine as healthful or damns them as potential killers.

Can all these often contradictory reports be right? Yes. Coffee and tea, after all, are complex mixtures of chemicals, several of which may independently affect health. 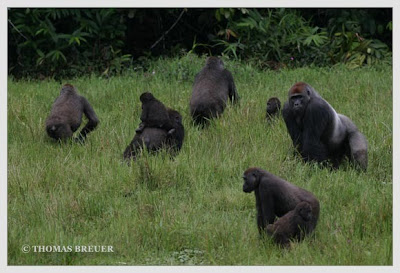 (CNN) -- An estimated 125,000 Western lowland gorillas are living in a swamp in equatorial Africa, researchers reported Tuesday, double the number of the endangered primates thought to survive worldwide.

"It's pretty astonishing," Hugo Rainey, one of the researchers who conducted the survey for the U.S.-based Wildlife Conservation Society, told CNN Tuesday.

The last census on the species, carried out during the 1980s, estimated that there were only 100,000 of the gorillas left worldwide. Since then, the researchers estimated, the numbers had been cut in half.

WCS survey teams conducted the research in 2006 and 2007, traveling to the remote Lac Tele Community Reserve in northern Republic of Congo, a vast area of swamp forest.

The Solar Revolution is Near

I have long been optimistic about Solar Energy (whether photovoltaic or thermal) becoming our largest energy source within a few decades. Earlier articles on the subject include :

A Future Timeline for Energy

Several recent events and developments have led me to reinforce this view. First of all, consider this article from Scientific American, detailing a Solar timeline to 2050. The article is not even Singularity-aware, yet details many steps that will enable Solar energy to expand by orders of magnitude above the level that it is today. Secondly, two of the most uniquely brilliant people alive today, Ray Kurzweil and Elon Musk (who I recently chatted with), have both provided compelling cases on why Solar will be our largest energy source by 2030. Both Kurzweil and Musk reside in significantly different spheres, yet have arrived at the same prediction.

Is MIT's Latest Solar 'Breakthrough' All Hype or a New Hope?

The research university's third solar-powered power move in six weeks sounds like a revolution in the making: Use electrolysis to capture the sun's potential and store it for later—on the cheap. But as PM's award-winning energy reporter explains, it's not so much a solar-specific breakthrough as it is a boon for the much-maligned hydrogen industry.

MIT announced on Thursday afternoon a new method of splitting water into hydrogen and oxygen, predicting that it will unleash a "solar revolution." And they're partly right. The research, which appears in the new issue Science, has little to do with solar power as we usually think of it. But it has wide-reaching implications as a storage medium, making renewable but intermittent energy sources like the sun and wind more practical for everyday use.

Is Aging An Accident Of Evolution? Stanford Scientists Say "Yes"

"Everyone has assumed we age by rust. But how do you explain animals that don't age? Some tortoises lay eggs at the age of 100, there are whales that live to be 200 and clams that make it past 400 years."

Prevailing theory of aging challenged by Stanford University Medical School researchers. Their discovery contradicts the prevailing theory that aging is a buildup of tissue damage similar to rust. The Stanford findings suggest specific genetic instructions drive the process. If they are right, science might one day find ways of switching the signals off and halting or even reversing aging.

From the New York Times:

Among other things, that's an extra half pound of fat weekly - mostly from oils and shortening. That doesn't count the fat in the extra quarter pound of meat Americans now eat every seven days. Those fats were somewhat offset by a steep drop in dairy consumption, the only major food group to have a decline, primarily in milk drinking. (But we do love our cheese. More and more of it.)

This portrait of the raw ingredients of the American diet is based on what the Agriculture Department calls "food availability" - the amount of food produced for the average American consumer. The data are adjusted for food losses (waste on farms; in processing and transportation; and in stores, restaurants and homes) to provide a close approximation of what individuals eat. (The most recent year for which data are available is 2006.)

Unveiled in 1960, the birth control pill revolutionized contraception. Yet despite an abundance of birth control options today, almost half the pregnancies in this country are unintended, according to the Centers for Disease Control and Prevention, more than in any other developed nation. What’s the reason?

The issue is not technology. But economics and human behavior are another story. Nearly a third of women who start a new type of birth control stop within a year, according to one recent study, largely because of changes in their insurance coverage. All methods have some side effects. And the current crop of intrauterine devices, or IUD’s, despite having a nearly perfect efficacy rate, have been slow to catch on, experts say, partly because more doctors need to be trained in inserting them.

From University Of Illinois:

CHAMPAIGN, Ill. — In the largest field trial of its kind in the United States, researchers have determined that the giant perennial grass Miscanthus x giganteus outperforms current biofuels sources – by a lot. Using Miscanthus as a feedstock for ethanol production in the U.S. could significantly reduce the acreage dedicated to biofuels while meeting government biofuels production goals, the researchers report.

The new findings, from researchers at the University of Illinois, appear this month in the journal Global Change Biology.