Precious Metals On Earth May Have Come From Asteroids 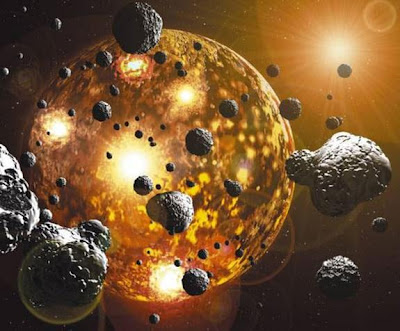 Artist's impression of the Earth during the period of the terminal bombardment.
CREDIT: Julian Baum/Take 27 Ltd
Asteroids May Have Brought Precious Metals To Earth -- Live Science
The precious metals that we see on Earth today may be largely heavenly in nature, coming from the sky billions of years ago, scientists now find.

Back when the Earth was just forming, the materials that make up the planet were combining and differentiating into layers by weight — lighter materials floated to the surface and now make up Earth's crust, while heavier materials such as iron sank to the planet's interior.

Will We Now Be Able To Control Fear?

A) Schematic cross-section of a mouse brain showing the distribution of CRHR1 gene activity and the associated neurotransmitter specificity. B) Glutamatergic neuron of the hippocampus. (Credit: © MPI of Psychiatry)
Control of Fear in the Brain Decoded: Emotional Balance Is Regulated by Molecular Factors Behind Stress Response, Study Finds -- Science Daily
ScienceDaily (Sep. 7, 2011) — When healthy people are faced with threatening situations, they react with a suitable behavioural response and do not descend into a state of either panic or indifference, as is the case, for example, with patients who suffer from anxiety.

With the help of genetic studies on mice, scientists from the Max Planck Institute of Psychiatry have discovered two opposing neuronal regulatory circuits for the generation and elimination of fear.

My Comment: I can see many applications from this science.
Posted by War News Updates Editor at 9:00 AM No comments:

The PackBot, first used in response to 9/11, helps explore an overheating nuclear plant in Japan this year.
How 9/11 Inspired A New Era Of Robotics -- CNN
When Robin Murphy saw the World Trade Center towers fall on September 11, she knew of an unexpected group that could help respond: robots.

Robots had never been tried in such real-world disasters, but they had gotten much smaller and more nimble in the years before that tragic event. So Murphy, a professor of computer science at Texas A&M University, and a small group of her fellow roboticists decided it was time. The robots were ready.

A Computer That's As Clever As A Human? 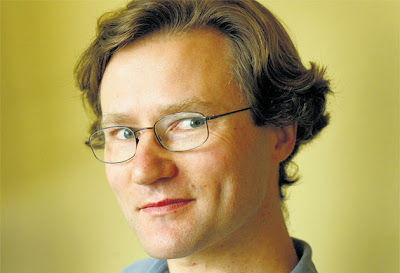 Rollo Carpenter, the inventor of the Cleverbot
Has Inventor Made A Computer That's As Clever As A Human? -- The Independent
Rollo Carpenter's Cleverbot was smart enough to convince a group of techies it was a person. But can it fool Tom Peck?

Given that, in countless science fiction films, the moment when the computers start thinking for themselves tends to coincide with the end of the world as we know it, it is perhaps a little unsettling that an American inventor has for more than 20 years been sponsoring a prize to encourage such a feat.

More worrying still, a conversational computer by the name of Cleverbot has arguably just come closer than ever to doing it.

Supernova 'Of A Generation'

This Hubble Space Telescope image of the face-on spiral galaxy Messier 101, known as the Pinwheel Galaxy, was released in 2006. Newscom/File
Supernova 'Of A Generation': How You Can See It With Binoculars -- Christian Science Monitor
A supernova in the nearby Pinwheel Galaxy is the closest supernova in 25 years. Situated near the Big Dipper, the SN 2011fe supernova can be seen with binoculars this week.

If you’ve got a decent pair of binoculars and clear skies, you’ll have a good view Wednesday night of the closest and brightest supernova display of the past 25 years.

The supernova, named SN 2011fe, is the 136th seen by astronomers this year, but its proximity makes it significant not only for stargazers but to the scientific community.

The event was first observed on Aug. 24, only hours after it first became visible from Earth. Located within the Pinwheel Galaxy, the explosion happened 21 million light-years away – a relatively small distance by astronomical standards.

Ice thickness is just as important or more so in helping understand what is happening in the far north Photo: AP/John McConnico
Arctic Sea Ice Falls To Record Low -- The Telegraph
The minimum summertime volume of Arctic sea ice fell to a record low last year, researchers said in a study to be published shortly, suggesting that thinning of the ice had outweighed a recovery in area.

The study estimated that last year broke the previous, 2007 record for the minimum volume of ice, which is calculated from a combination of sea ice area and thickness.

The research adds to a picture of rapid climate change at the top of the world that could see the Arctic Ocean ice-free within decades, spurring new oil exploration opportunities but possibly also disrupted weather patterns far afield and a faster rise in sea levels.

The Evolution Of Micro-Air-Vehicles (MAV)

For years now, DARPA and other free-thinking research institutions have been developing micro-air-vehicles (MAV), usually modeled after insects. But building a tiny, lightweight flying robot is tough when you need a power supply--like an onboard battery--to keep the MAV flying. Then researchers turned to insect mind control--implanting live insects with machinery that lets humans manipulate their movements--but the problem remained: neural control hardware requires a battery to run.

My Comment: The tools for surveillance are getting smaller and smaller.
Posted by War News Updates Editor at 9:00 AM No comments:


Phase One Of World's First Commercial Spaceport Is Now 90% Completed - In Time For First Flights In 2013 -- Daily Mail
Phase one of the world's first commercial spaceport, which will be the hub for Virgin's consumer spaceflights, is now 90 per cent complete.

The 1,800-acre Spaceport America site, in Las Cruces, New Mexico, is the home base for Virgin Galactic, Richard Branson's most ambitious business venture yet.

Quantum Computers Closer to Reality Than Ever 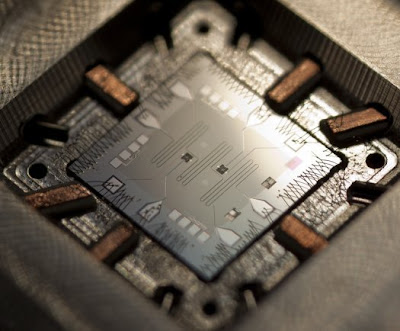 Chip for Quantum Computing The two black squares are the qubits, or processor; the center meandering line is the quantum bus; and the lateral meandering lines are the quantum memory. Erik Lucero
Two Key Advances Bring Quantum Computers Closer to Reality Than Ever -- Popular Science
Researchers on two continents are reporting two big breakthroughs in quantum computing today — a quantum system built on the familiar von Neumann processor-memory architecture, and a working digital quantum simulator built on a quantum-computer platform. Although these developments are still constrained to the lab, they’re yet another sign that a quantum leap in computing may be just around the corner. 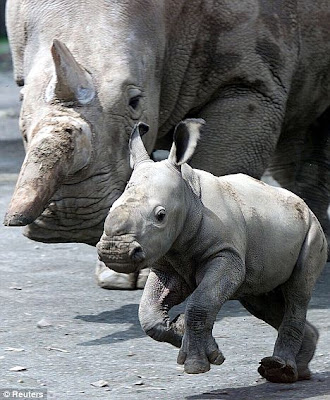 Tragic: Northern white rhinos are extinct in the wild. This photo, taken in 2000, is of a young male with his mother Najin at a Zoo in the East Bohemian town of Dvur Kralove
Northern White Rhinos Set For Stem Cell Test-Tube Babies To Save Species From Extinction -- Daily Mail
The northern white rhino, one of the planet’s most endangered animals, could be saved by pioneering stem cell research.

Scientists at the Scripps Research Institute in La Jolla, California, also hope their work will save other animals teetering on the edge of extinction.

The team have managed to create stem cells from the majestic animals and hope they will eventually be able to produce ‘test tube babies’, too.

Why The Arctic Will Be A Strategic Hotspot In The Future 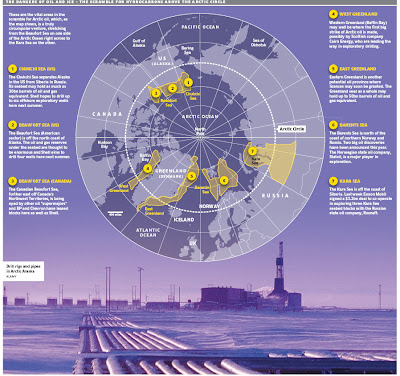 Unlocked By Melting Ice-Caps, The Great Polar Oil Rush Has Begun -- The Independent

Trillions are at stake, and the ecological risks are equally huge. Michael McCarthy reports.

It's the melting of the Arctic ice, as the climate warms, that makes it possible — and you can understand why they're all piling in. In July 2008, the US Geological Survey released the first ever publicly available estimate of the oil locked in the earth north of the Arctic Circle.

It was 90 billion barrels, representing an estimated 13 per cent of the world's undiscovered oil resources. If you're an oil company, or an oil-hungry economy, that's more than enough to make your mouth water.

My Comment: One word sums up why we have this flurry of activity now .... oil.
Posted by War News Updates Editor at 6:00 PM No comments:

Why Are Women's "Boobs" Getting Bigger?

Scientists in the UK are trying to figure out why women's breasts are getting bigger.

While some boffins blame expanding waistlines for the increase in bust sizes, others say pollution from pesticides is causing the 'outburst'.

But others feel there's an as yet uncovered real reason as to why boobs are growing, reports The Daily Star.

A scientific source said: "It's the big question and it's got a lot of people baffled." 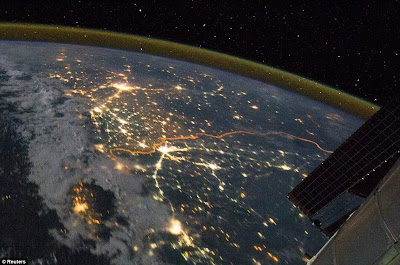 (Click on Image to Enlarge)
Spectacular: The International Space Station image captures the floodlit border between India, above the orange line, and Pakistan, below the border in the picture

Whose Bright Idea Was That? Border Between India And Pakistan Is So Brightly Lit It Can Be Seen From Space -- Daily Mail

Snaking for hundreds of miles across the earth's surface, this spectacular picture shows one of the planet's land borders like never before.

The dramatic picture shows a bright orange line jutting across the earth, indicating the border between India and Pakistan.

My Comment: It must be working .... cross border raids from Pakistan into India have dropped appreciably in the past few years, all be it that the peace can be broken at any time.

Posted by War News Updates Editor at 11:30 AM No comments:

Photo: Pradaxa is now available for use in the UK

A PILL costing less than £3 a day is being hailed as the biggest breakthrough in stroke prevention in 50 years.

The drug, which slashes the risk of suffering a stroke by over a third, will help more than a million Britons.

Pradaxa is now available for use in the UK. In trials it was found to significantly reduce the risk of a stroke in patients with an irregular heartbeat, known as atrial fibrillation. This is one of the main causes of strokes.

My Comment: Looks promising.
Posted by War News Updates Editor at 7:00 AM No comments: