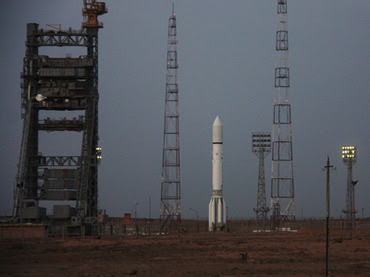 The Russian Defense Ministry has reportedly refused to adopt GLONASS, the country’s rival to GPS, due to its technical shortcomings. One of the system’s 24 satellites has malfunctioned, and besides, GLONASS is still in its testing phase. ­

The malfunctioning satellite will not be operational any time soon as it has already exhausted its power after 96 months in service, Nezavisimaya Gazeta reports. And due to a difference in orbit inclination, no existing reserve satellite can substitute it.

My Comment: After a decade of war the U.S. has clearly shown the value of GPS systems for precision bomb strikes. Not having this essential network is a significant loss for the Russian military.
Update: A link to how China and other countries are trying to develop their own GPS system.
Posted by War News Updates Editor at 1:00 AM 1 comment:

Christianity Is 'Close To Extinction' In The Middle East

Christianity 'Close To Extinction' In Middle East -- The Telegraph

Christianity faces being wiped out of the “biblical heartlands” in the Middle East because of mounting persecution of worshippers, according to a new report.

The study warns that Christians suffer greater hostility across the world than any other religious group. And it claims politicians have been “blind” to the extent of violence faced by Christians in Africa, Asia and the Middle East. The most common threat to Christians abroad is militant Islam, it says, claiming that oppression in Muslim countries is often ignored because of a fear that criticism will be seen as “racism”.

It warns that converts from Islam face being killed in Saudi Arabia, Mauritania and Iran and risk severe legal penalties in other countries across the Middle East. The report, by the think tank Civitas, says: “It is generally accepted that many faith-based groups face discrimination or persecution to some degree.

My Comment: I have remarked on more than one occasion that this is one of the most under-reported stories of the past few years.
Posted by War News Updates Editor at 12:00 AM 1 comment: