The Oldest Known Evidence Of Human Warfare Has Been Confirmed 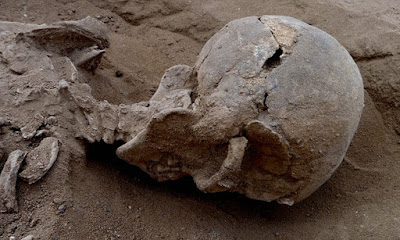 Part of a man’s skeleton found lying in the lagoon. The skull has multiple lesions on the front and left side consistent with wounds from a blunt implement. Photograph: Marta Mirazón Lahr

Some 10,000 years ago a woman in the last stages of pregnancy met a terrible death, trussed like a captive animal and dumped into shallow water at the edge of a Kenyan lagoon. She died with at least 27 members of her tribe, all equally brutally murdered, in the earliest evidence of warfare between stone age hunter-gatherers.

The fossilised remains of the victims, still lying where they fell, preserved in the sediment of a marshy pool that dried up thousands of years ago, were found by a team of scientists from Cambridge University.

CSN Editor: 27 victims .... men, women, and children .... all killed in the same place and time .... and violently. This was a deliberate massacre where taking prisoners was not a priority.

This Map Represents Where The World's Population Lives

(Click on Image to Enlarge)
Zero Hedge: How do you view your country relative to others? Chances are if it’s based on most world maps, your view is distorted.

As the world turns its gaze to the rich and pretty people in Davos this coming week, The World Economic Forum unleashed the following cartogram, created by Reddit user TeaDranks, that could change your entire perception of the world. Cartograms scale a region’s geographic space according to a particular attribute and in this case each square now represents 500,000 people.