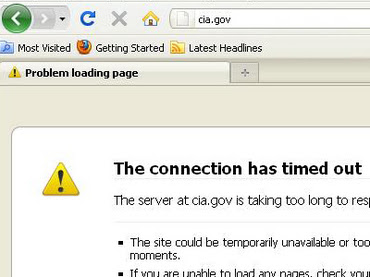 The CIA’s Web site was inaccessible around 3:30 on Friday afternoon.

Preston Golson, a spokesman for the CIA, told The Post in an e-mailed statement, “We are looking into these reports.”

Family Portraits That Age You... In A Split-Second

The Family Portraits That Age You... In A Split-Second -- Daily Mail
* Photographer's 20-year project puts together series of amazing pictures of his relatives without using Photoshop
* Some are spliced with younger selves - while others combine parents with their children

A photo shows how a glamorous 16 year old will look as an old lady by using two images taken 46 years apart.

Half of the pretty blonde's wrinkle-free face is juxtaposed with a similar portrait of her as a white-haired old woman to show the passing of time.

The incredible series of pictures called AgeMap is a 20-year project by Bobby Neel Adams, who also merges portraits of family members into one image in his Family Tree series.

The orbiter captured the famous jets of water ice spraying from Saturn's moon Enceladus in a recent visible-light image - visible as a very faint smoky halo of ice shrouding the moon's south pole.

The spacecraft has orbited the planet Saturn since 2004, studying the planet, its mysterious moons, and its rings of tiny particles of ice.

The geyser-like jets on Enceladus appear as a small white blur below the dark south pole, down and to the right of the illuminated part of the moon's surface in the image.

The jets are made of water ice - and hint that Enceladus could have oceans below its surface.

The geyser-like jets create a halo of ice, dust and gas around Enceladus that helps feed Saturn's E ring.

Is This The Funniest YouTube Video Ever? Google Invents Algorithm To Find The Most Amusing Clip... And 'No No No No Cat' Is The Winner -- Daily Mail
You’d think the reasons for something being funny were beyond the reach of science – but Google’s brain-box researchers have managed to come up with a formula for working out which YouTube video clips are the funniest.

Their algorithm has declared that a video of a cat appearing to say ‘no’ over and over again – called No No No No Cat - is currently the funniest.

Mystery Of 200-Year-Old Shipwreck Found Off US Coast -- The Telegraph
For two centuries it rested a mile from shore, shrouded by a treacherous reef from the pleasure boaters and beachgoers who haunt New England's southern coast.

Now, researchers from the US Navy are hoping to confirm what the men who discovered the wreck believe: that the sunken ship off the coast of Rhode Island is the USS Revenge, commanded by Oliver Hazard Perry and lost on a stormy January day in 1811.

"The Revenge was forgotten, it became a footnote," said Charlie Buffum, a brewery owner from Connecticut who found the shipwreck while diving with friend Craig Harger. "We are very confident this is it."

A New Approach To Fight Cancer

Out of control: biologists still cannot explain why cancerous cells will proliferate and spread to other organs if unchecked
The Final Frontier In The War On Cancer -- The Telegraph
Frustrated by glacial progress, the US has turned to physicists to fight the disease, reveals Paul Davies.

When President Nixon declared war on cancer 40 years ago, he also sanctioned one of the biggest research programmes in history. The budget of America’s National Cancer Institute (NCI) is now $5 billion a year, more than Nasa spends on space exploration. Cancer accounts for a large slice of research funds in most other developed countries, too: Cancer Research UK, for example, has a budget of £500 million a year.

Rising Oil Production in Alberta: More Evidence Disproving Hubbert’s Peak -- New American
The latest report from the Calgary (Alberta, Canada) Herald was nothing but good news: The steadily declining production of light oil from 2002 to late 2010 has reversed itself completely and is now not only proving the power and principles of a free market but “will change the way we think about oil, with many weighty consequences…” says blogger Peter Tertzakian. The graph he provided here shows Alberta’s production declining by about 16,000 barrels per day (B/d) every year since 2002, dropping to just over 300,000 B/d in late 2010. Now, thanks to new capital, new technology, and new enthusiasm, production is close to 400,000 B/d. It also “could heighten the blood pressure of a few peak oil theorists,” said Tertzakian.

How Many Humans Have Lived On This Planet?

Do The Dead Outnumber The Living? -- BBC
The population of the planet reached seven billion in October, according to the United Nations. But what's the figure for all those who have lived before us?

It is often said that there are more people alive today than have ever lived - and this "fact" has raised its head again since the UN announcement about the planet's population reaching a new high.

The idea helps fuel fears that the population is expanding too fast.

It is true that if you delve back into the mists of time, the population of Earth was tiny in comparison to today and logically it might seem plausible that the living outnumber the dead.

Pandora's Box Has Already Been Opened For Bio-Terrorists

Details Of Secret Experiments On Deadly Man-Made Bird Flu That Kills Over Half Of The People It Infects WILL Get Out, Says Bioterrorism Watchdog -- Daily Mail
* 'The infrastructure to stop a pandemic is not there,' says Professor Paul Keim

Details of secret experiments by scientists who have created the most deadly form of bird flu in the lab will inevitably be leaked - potentially into the hands of terrorists - an expert has warned.

A furore erupted in December over the decision by the U.S National Science Advisory Board for Biosecurity (NSABB) to censor details of the virus being made public, which can be transmitted by coughs and sneezes.

But now the head of that board claims they will enter the public domain anyway.

Facebook And Twitter Are More Addictive Than Cigarettes Or Alcohol, Study Finds -- FOX News
A new study suggests that social networking services such as Facebook and Twitter are more difficult to resist than cigarettes or alcohol.

A team from the University of Chicago’s Booth School of Business recently conducted an experiment involving 205 people in Wurtzburg, Germany to analyze the addictive properties of social media and other vices.

Participants in the week-long study were polled via BlackBerry smartphones seven times per day and asked to report when they experienced a desire within the past 30 minutes, and whether or not the succumbed to that desire. They were also asked to gauge each desire on a scale from mild to “irresistible.”
Read more ....
My Comment: I could not care less about Twitter and Facebook, but the children of my friends are certainly attached to these websites.

Posted by War News Updates Editor at 12:00 PM No comments:

The Climate Skeptics 'May' Be Right 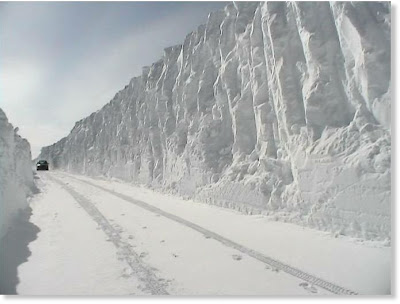 From Climategate Central: The Skeptics Were Right -- Don Surber
The world is cooling. Finally, this admission comes from the British weather service (the Met Office) and the University of East Anglia’s Climatic Research Unit — the center of the Climategate Conspiracy in which some climatologists conspired to manipulate data in a mad effort to “prove” their daft theory that using carbon-based fuels would turn the planet into Hell On Earth.

They now must admit the truth that Global Warming is in error.

And so they do.

From the London Daily Mail:

My Comment: The skeptics have a point .... this is the weather in Europe today.
Posted by War News Updates Editor at 9:00 AM No comments: 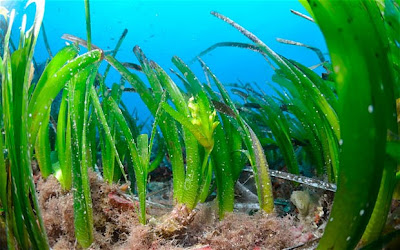 Australian scientists sequenced the DNA of samples of the giant seagrass, Posidonia oceanic, from 40 underwater meadows in an area spanning more than 2,000 miles, from Spain to Cyprus.

The analysis, published in the journal PLos ONE, found the seagrass was between 12,000 and 200,000 years old and was most likely to be at least 100,000 years old. This is far older than the current known oldest species, a Tasmanian plant that is believed to be 43,000 years old.

Read more ....
My Comment: Now that is old.
Posted by War News Updates Editor at 8:00 AM No comments:

Posted by War News Updates Editor at 5:00 PM No comments: