Better Eyes For The Next Generation of UAVs

Hyperspectral Sensors: The Flying Eyes That See The Invisible -- Popular Mechanics
Hyperspectral imagers seen in bands of light that humans cannot. They are changing the way satellites scan the world, and now they're about to go aboard unmanned aircraft.

Bees see what we don't. Their eyes are adept at seeing in ultraviolet, so much so that flowers have evolved colorful patterns visible only in UV to attract bees' attention.

The vision of these buzzing insects is just one example of what lies beyond the limits of our naked eyes. In the bands beyond what we can see, there's lots of data that can be used to identify objects. But a new breed of man-made sensors is, like the eye of a bee, plucking information from a wider part of the spectrum than a camera or eye can see.

My Comment: In short .... you can run but you cannot hide .... the reaper uav in the sky will still be able to see you.
Posted by War News Updates Editor at 2:00 AM No comments:

The U.S. Navy Cyber Defense Operations Command The U.S. military and intelligence arms are already defending the nation from cyber attacks. DARPA hopes to give them another tool.
Former CIA Chief: A Separate Internet Could Curb Cyber Threats -- Popular Science
To combat cyber attacks, the U.S. may need more than new cyber defenses. It might need a whole new piece of Internet infrastructure. So says former CIA director Michael Hayden, who served under President G.W. Bush, and he’s not the only one. Several lawmakers and the current Cyber Command chief Gen. Keith Alexander are toying with the notion of creating a “.secure” domain where Fourth Amendment rights to privacy are voluntarily foregone in order to keep that corner of the Internet free of cyber criminals.

My Comment: We are going down this pathway, and while setting up the infrastructure for a separate but secure will be expensive .... the alternative of letting everything continue as is may end up being even more pricey.
Posted by War News Updates Editor at 8:00 PM No comments: 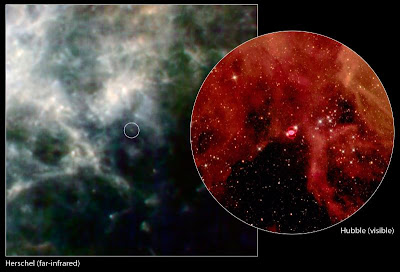 The region around Supernova 1987A as viewed by Herschel and Hubble. (Credit: ESA/Herschel/PACS/SPIRE/NASA-JPL/Caltech/UCL/STScI and the Hubble Heritage Team (AURA/STScI/NASA/ESA)
Stardust in Our Backyard Provides New Clues to Galaxy Evolution -- Science Daily
ScienceDaily (July 7, 2011) — New data from the European Space Agency's Herschel Space Observatory have revealed surprisingly large amounts of cold dust in the remnant of the famous supernova SN1987A, which exploded 24 years ago in the Large Magellanic Cloud, a neighboring galaxy of the Milky Way. With this discovery, astronomers confirm that supernovae are able to produce significant quantities of dust over very short time scales. This may help explain previous observations, by Herschel and other observatories, of abundant dust in the early Universe as seen in high-redshift galaxies.

A Lightning Show On Saturn

Now astronomers and NASA's Cassini spacecraft, which has been orbiting Saturn since 2004, have captured the most detailed views to date of the phenomenon. 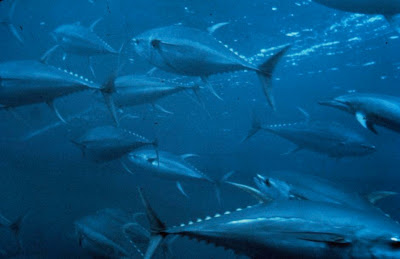 Five of the eight species of tuna now qualify as threatened or near-threatened, according to the world's main authority on the conservation status of animal species. The tuna face a bleak future if more isn't done to safeguard them from overfishing, researchers warn.

Published today (July 7), the draft assessment of the International Union for Conservation of Nature's Red List of Threatened Species shows most tuna species are declining.