A Tribute To The Classic Star Trek Uniform 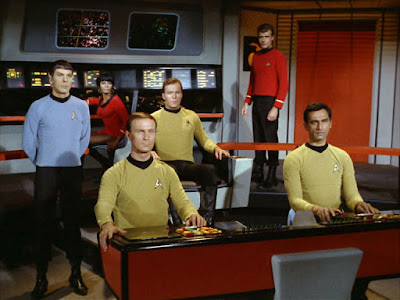 Popular Mechanics: An Ode to the Classic Star Trek Uniform

In "Tomorrow Is Yesterday," an episode of the original Star Trek, the good ship Enterprise accidentally time warps back to 20th Century Earth. A gung-ho U.S. Air Force colonel captures our hero Captain Kirk and, upon giving him the once-over, snarls, "What is that? Is that a uniform of some kind?"

"This little thing?" replies a coy William Shatner. "Something I slipped on."

Actually, it was a lot more.

In today's over-the-top world of fantasy entertainment, where everyone from Batman on down wears self-conscious, rubbery body armor, there is something reassuringly relaxed and classic about the original Star Trek uniform. Trekkies still embrace that quality as the 50th anniversary of the premiere of their beloved NBC series approaches on September 8.

CSN Editor: I loved those mini-skirts.
Posted by War News Updates Editor at 6:00 AM No comments: 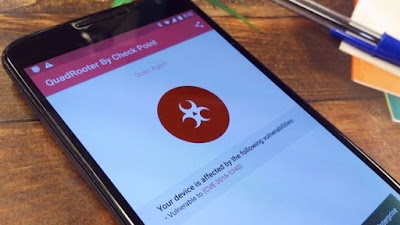 Serious security flaws that could give attackers complete access to a phone's data have been found in software used on tens of millions of Android devices.

The bugs were uncovered by Checkpoint researchers looking at software running on chipsets made by US firm Qualcomm.

Qualcomm processors are found in about 900 million Android phones, the company said.

However, there is no evidence of the vulnerabilities currently being used in attacks by cyberthieves.

The Entire History Of Civilization In One Chart

Business Insider/Slate: The Entire History Of The World In One Chart

This “Histomap,” created by John B. Sparks, was first printed by Rand McNally in 1931.

This giant, ambitious chart fit neatly with a trend in nonfiction book publishing of the 1920s and 1930s: the “outline,” in which large subjects (the history of the world! every school of philosophy! all of modern physics!) were distilled into a form comprehensible to the most uneducated layman.

The 5-foot-long Histomap was sold for $1 and folded into a green cover, which featured endorsements from historians and reviewers. The chart was advertised as “clear, vivid, and shorn of elaboration,” while at the same time capable of “holding you enthralled” by presenting:

the actual picture of the march of civilization, from the mud huts of the ancients thru the monarchistic glamour of the middle ages to the living panorama of life in present day America.

The chart emphasizes domination, using color to show how the power of various “peoples” (a quasi-racial understanding of the nature of human groups, quite popular at the time) evolved throughout history.

WNU Editor: This is so cool. For a fully zoomable version go here.
Posted by War News Updates Editor at 12:00 AM No comments: