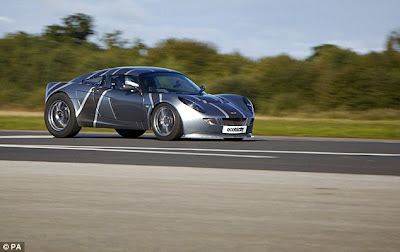 There was no roar from the engine as this super-charged sports car topped 150mph on its record-breaking run yesterday. Only the relatively gentle sound of tyre rolling over road disturbed the peace and quiet as the UK land speed record for an electric car was shattered.

The team behind a supercar powered by energy from wind turbines believe they have smashed the UK land-speed record for an electric car. Their recorded speed of 148.7mph breaks the record of 137mph set by Don Wales, the grandson of speed ace Sir Malcolm Campbell, 10 years ago.

My Comment: Here is some more info .... the Nemesis can travel from 100-150 miles between charges, depending on driving style, and can be charged from empty in less than 30 minutes.
Posted by War News Updates Editor at 5:00 PM 1 comment: 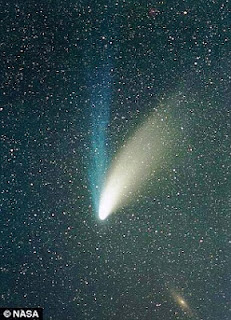 Photo: Hale-Bopp sailed overhead, leaving two trails: An ionic trail of magnetically-charged particles facing directly away from the sun (left), and a trail of dust and debris.

They are one of the most spectacular views a human could hope to see - and next year a comet which could outshine the moon is due to fly by the Earth.

Comet ISON is visiting the inner solar system and is set to put on spectacular views for the Northern Hemisphere across November and December as it heads towards the sun.

It may prove to be brighter than any comet of the last century - visible even in broad daylight - and this may end up being its one and only trip to the solar system, as its trajectory may see it plunge into the sun in a fiery death.

My Comment: Let's hope that it will be a bright one for everyone to see.