Will This Be The U.S. Military's Future Means To Ship Materials And Soldiers? 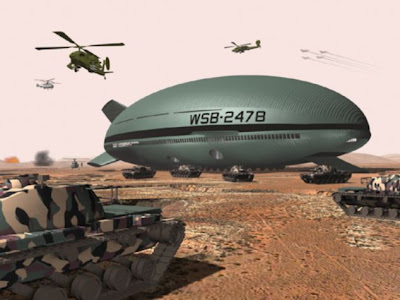 A concept of the airship on the battlefield, where it could be used to transport tanks and soldiers directly onto the front line

* The Aeroscraft can carry three times more than the biggest military cargo planes over thousands of miles
* Heavily backed by the U.S. military, it is now at the prototype stage and is set for its first test flight * It is capable of vertical take off and landing and doesn't even need a landing strip

A radical new kind of airship funded by the US military is about to make its first test flight - and it looks uncannily like the Thunderbird 2 craft from the classic TV show.

The Aeroscraft airship will carry three times as much as the biggest military cargo planes over thousands of miles, use a third of the fuel, and it doesn't even need a landing strip.

It could also have major implications for cargo haulage, and almost everything now laboriously transported across the planet's surface by boat, train and lorry could within years be carried through the skies, its makers claim.

My Comment: It's an old concept but with a modern twist. I wish them well.
Posted by War News Updates Editor at 5:00 AM