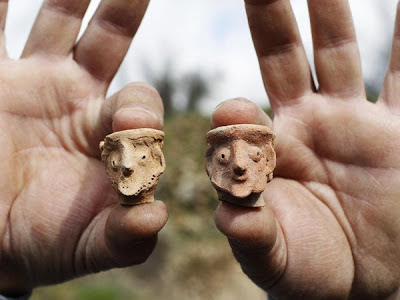 An employee of the Israeli Antiquities Authority displays figurines at Tel Motza archaeological site on the outskirts of Jerusalem. Baz Ratner / Reuters

Archaeologists have uncovered a 2,750-year-old temple near Jerusalem, along with pottery and clay figurines that suggest the site was the home base for a ritual cult, the Israeli Antiquities Authority said Wednesday. The discovery was made during excavations at the Tel Motza archaeological site, about 3 miles (5 kilometers) west of Jerusalem, during preparations for work on a new section of Israeli's Highway 1, the agency said in a statement.

My Comment: More evidence that Jerusalem is built on a history that spans many millennium.
Posted by War News Updates Editor at 2:00 AM