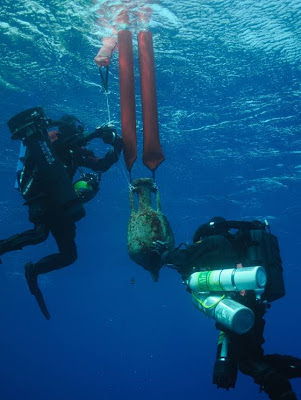 Archaeologists secure an amphora from the Antikythera wreck.(Photo: Ephorate of Culture/Greece)

Today Ancient artifacts resembling the Antikythera mechanism, an ancient bronze clockwork astronomical calculator, may rest amid the larger-than-expected Roman shipwreck that yielded the device in 1901.

Marine archaeologists report they have uncovered new secrets of an ancient Roman shipwreck famed for yielding an amazingly sophisticated astronomical calculator. An international survey team says the ship is twice as long as originally thought and contains many more calcified objects amid the ship's lost cargo that hint at new discoveries.

My Comment: The ancient Romans were advanced .... more than what we give them credit for.
Posted by War News Updates Editor at 1:00 AM