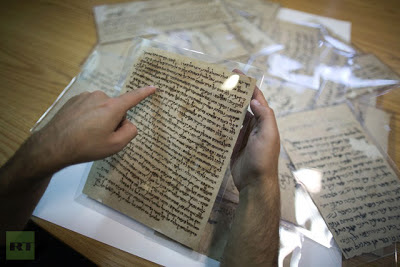 Documents from a collection of discarded religious Jewish, discovered inside caves in a Taliban stronghold in northern Afghanistan, which date back from the 10th century are displayed to the media during a press conference on January 3, 2013, at the national library in Jerusalem. (AFP Photo / Menahem Kahana)

Israel's National Library has acquired 1,000-year-old Jewish documents discovered in Afghanistan. The collection of 29 pages includes writings by Saadia Gaon, and has been compared in significance to the 19th-century discovery of the Cairo Genizah. ­

The rare documents were discovered by villagers near the Iran-Uzbekistan border in a cave believed to be the home of a family of foxes. The manuscripts include religious writings, as well as letters and civil contracts written in Hebrew, Aramaic, Arabic and Persian, and in a variety of alphabets.

My Comment: I am impressed that these documents are still in good shape .... after 1,000 years.
Posted by War News Updates Editor at 12:00 AM