An Alternative To GPS? 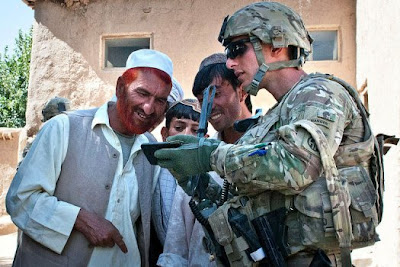 A U.S. Army 2nd Lieutenant Uses An Army Issued Smartphone To Pull Up A Map For Afghan Villagers United States Army via Wikimedia

Locata's technology goes where GPS can't, delivering a signal one million times stronger than those beamed from satellites.

Indoor navigation is most certainly the holy grail for positioning system makers right now. Satellite-based location technologies like GPS work wonderfully out under the open sky, where signals bounced from satellites to receivers on the ground are unhindered by man-made structures or natural obstructions. Take that same technology into the subway or a large shopping mall, and the signal goes dead. But a new ground-based positioning system called Locata could soon replace or augment satnav using radio signals that are a million times stronger than GPS signals, indoors or out.
Read more ....

My Comment: The military will love this .... if it works.
Posted by War News Updates Editor at 3:00 AM