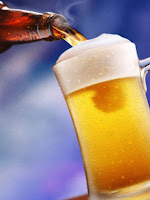 It will be tougher for Russians to cry in their beer in 2013. Restrictions on when and where beer can be sold go into effect Jan. 1 with a law that declared beer is alcohol, not food. Under the new rules, beer can only be sold in licensed outlets — not street kiosks, gas stations and bus depots like it has been. Russians won't be able to buy it from shops between 11 p.m. and 8 a.m., and beer commercials are a thing of the past. The limits are part of a government effort to reduce alcohol abuse in Russian, where one in five male deaths are linked to booze, according to world health experts. Not everyone is toasting the change, however.

My Comment: My dad (who is Russian and when he was alive loved beer) always treated beer as food.
Posted by War News Updates Editor at 12:00 AM