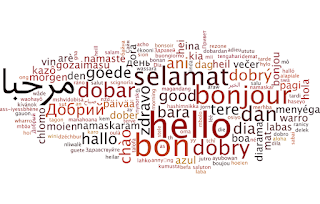 Scientists say they have traced the world's 6,000 modern languages — from English to Mandarin — back to a single "mother tongue," an ancestral language spoken in Africa 50,000 to 70,000 years ago.

New research, published in the journal Science, suggests this single ancient language resulted in human civilization — a Diaspora — as well as advances in art and hunting tool technology, and laid the groundwork for all the world's cultures.

The research, by Quentin Atkinson from the University of Auckland in New Zealand, also found that speech evolved far earlier than previously thought. And the findings implied, though did not prove, that modern language originated only once, an issue of controversy among linguists, according to the New York Times.

CSN Editor: The stat that caught my attention in this post is that there are 6,000 modern languages.

Posted by War News Updates Editor at 1:00 AM

This finding may be dubious--although it makes a kind of logical sense. But how can it account foe genetic drift?

Popular articles on linguistics more often than not misrepresent the actual significance of the findings.