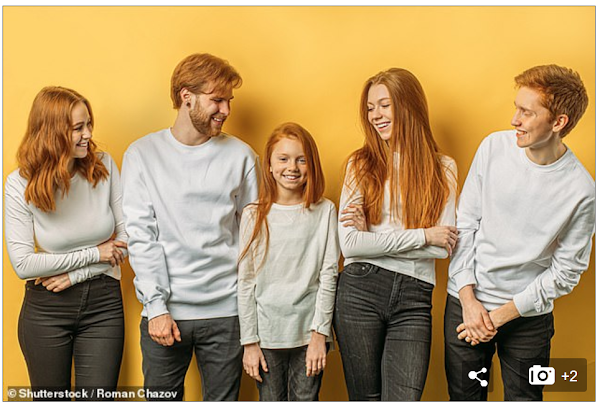 Redheads have a genetic mutation which means their melanocytes have a faulty version of a key receptor and therefore can not make dark pigment to get a tan. But a knock-on effect of this is a chemical imbalance leading to a cascade of different hormones which ultimately enhances the effect of pain-blocking receptors (stock)

Daily Mail: Redheads have a higher PAIN threshold than blondes or brunettes because their skin's pigment-producing cells lack the function of a certain receptor, study reveals

* The end result is that gingers produce more opioid signals than people with other hair colours and complections and have an elevated pain threshold Ginger people can tolerate more pain than brunettes and blondes, and a new study has found out why this is.

It found that the skin cells that determine a person's pigmentation, called melanocytes, are pivotal in deciding a person's pain threshold. Redheads have a genetic mutation which means their melanocytes have a faulty version of a key receptor and therefore cannot make dark pigment to get a tan.

Update #2: Why redheads feel less pain, according to scientists (NYPost)

CSN Editor: The connection between skin pigmentation and pain is a surprise.