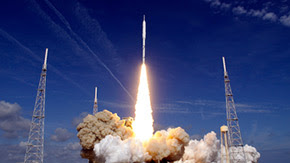 A plan to overhaul America’s space agency is long overdue.

IN 2004 George Bush announced a plan for America’s space agency, NASA, to return to the moon by 2020, land there, explore the surface and set up a base. The moon would then serve as a staging post for a journey to Mars. It was, unfortunately, unclear how this modest proposal would be paid for and, as work began and costs spiralled, the “vision” seemed more science fiction than science.