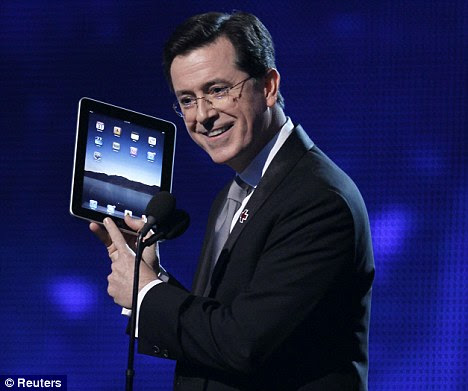 'Does this make me cool?': Political satirist Stephen Colbert whips out an Apple iPad during his opening speech at the Grammy Awards last night
From The Daily Mail:

Amazon has given in to publisher Macmillan's pricing demands that will lead to the online retailer raising prices on some of its e-books.

Following Apple's iPad launch last week, Amazon's Kindle has entered into a battle of supremacy with the new gadget.

Apple has said publishers can set their own price for e-books - although it will take 30 per cent, while Amazon currently charges $9.99 for the e-book version of most new releases and bestsellers.

Macmillan wants Amazon to increase their charges to nearer $15.