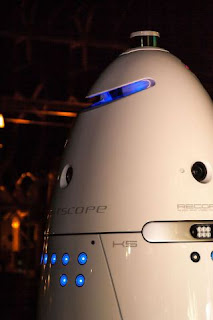 The robots might one day rise up and take over, but a Palo Alto startup called Knightscope has developed a fleet of crime-fighting machinery it hopes to keep us safe.

Knightscope’s K5 security bots resemble a mix between R2D2 and a Dalek from Doctor Who – and the system behind these bots is a bit Orwellian. The K5’s have broadcasting and sophisticated monitoring capabilities to keep public spaces in check as they rove through open areas, halls and corridors for suspicious activity.

The units upload what they see to a backend security network using 360-degree high-definition and low-light infrared cameras and a built-in microphone can be used to communicate with passersby. An audio event detection system can also pick up on activities like breaking glass and send an alert to the system as well.

CSN Editor: Robocop it is not .... but they are getting there.
Posted by War News Updates Editor at 3:00 AM