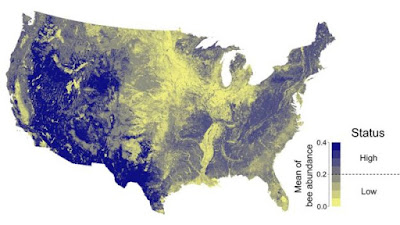 This map shows bee abundance in 2013

BBC: US wild bee numbers decline as land is converted for biofuel

Wild bees in the US have declined in many farming areas according to the first national effort to map their numbers.

The study suggests that between 2008 and 2013, the numbers of wild bees went down across almost a quarter of the US.

The researchers say that the conversion of land to grow corn for biofuels is a key element in the decline.

If the trend continues say the scientists, it could drive up costs and destabilise crop production.

Wild bees play an important role in pollinating many US crops and plants. It's estimated that they contribute around $3bn to the value of agriculture every year.

CSN Editor: This is not a positive trend.
Posted by War News Updates Editor at 3:00 PM