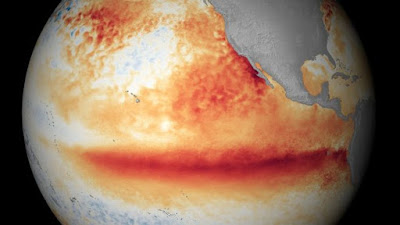 The strongest El Nino on record is likely to increase the threat of hunger and disease for tens of millions of people in 2016 aid agencies say.

The weather phenomenon is set to exacerbate droughts in some areas while increasing flooding in others.

Some of the worst impacts are likely in Africa with food shortages expected to peak in February.

Regions including the Caribbean, Central and South America will also be hit in the next six months.

This periodic weather event, which tends to drive up global temperatures and disturb weather patterns, has helped push 2015 into the record books as the world's warmest year.

CSN Editor: Another example on how interconnected the world's weather systems are.
Posted by War News Updates Editor at 12:00 AM