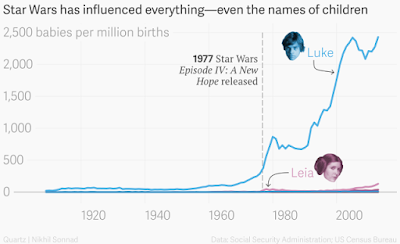 Star Wars is everywhere. With the latest installment of the film series about to be released, there are Star Wars toasters, Star Wars tape dispensers, and Star Wars soup.

There are even Star Wars babies.

Our analysis of the Social Security Administration’s data on American baby names shows that the film franchise has definitely moved the needle on naming trends in the US. Star Wars created hundreds of Lukes, Leias, Hans, Landos, and even, yes, Darths.

CSN Editor: Who in his (or her) right mind wound name their kid "Darth"?
Posted by War News Updates Editor at 12:00 PM