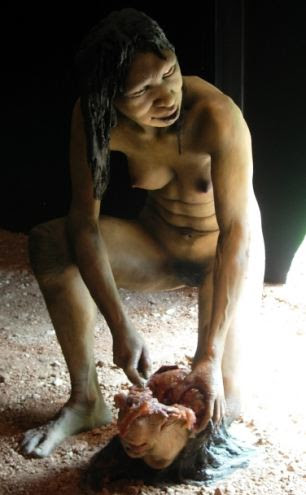 A model of a homo antecessor female scooping out the brains of human head
Early Man 'Butchered And Ate The Brains Of Children As Part Of Everyday Diet' -- The Daily Mail
Early cavemen in Europe ate human meat as part of their everyday diet, new research suggests.

A new study of fossil bones in Spain shows that cannibalism was a normal part of daily life around 800,000 years ago among Europe’s first humans.

Bones from the cave, called Gran Dolina, show signs of cuts and other marks which will have been made by early stone tools.