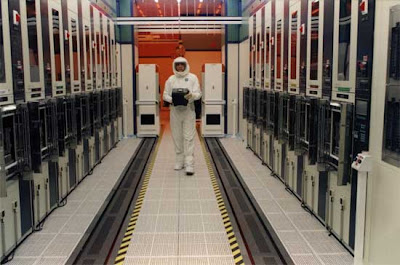 While Moore's Law for increasing computer chip transistor density won't go on for more than another 20 years it is still happening. Intel introduced 32 nanometer chips in 2009 and will introduce 22 nm chips in 2011. The New York Times reports on Rice University and Hewlett-Packard researchers who have developed 5 nanometer logic devices.

These chips store only 1,000 bits of data, but if the new technology fulfills the promise its inventors see, single chips that store as much as today’s highest capacity disk drives could be possible in five years. The new method involves filaments as thin as five nanometers in width — thinner than what the industry hopes to achieve by the end of the decade using standard techniques. The initial discovery was made by Jun Yao, a graduate researcher at Rice. Mr. Yao said he stumbled on the switch by accident.