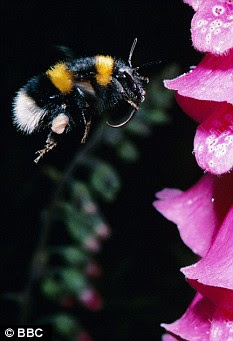 For almost a century, baffled scientists have wondered how bumblebees stay in the air. Now a new study has shown they defy the laws of gravity by using brute force.

Unlike the elegant, efficient flight of butterflies and dragonflies, they furiously flap their wings fuelled by energy-rich nectar, says the Oxford University team.

‘Bumblebee flight is surprisingly inefficient. Aerodynamically speaking it’s as if the insect is “split in half”', said Dr Richard Bomfrey, of the Department of Zoology.