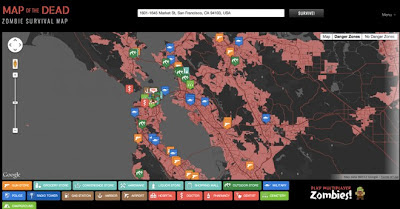 How safe are you when the zombies come for your brain? Photo: Google Maps/Doejo
Zombie Survival Maps Show Danger Zones, Armories and Food Sources for Entire U.S. -- Gadget Lab
The Walking Dead teaches us that well-stocked pantries and armories are paramount to the survival of the human race after a zombie infestation. Canned food and ammunition: You can never have enough of these key essentials.

Enter the Map of the Dead from Doejo, which overlays zombie danger zones and potential supply locations on a Google Map of your local haunts. Red areas denote population centers where zombies might graze, while dark gray zones cover parks and wilderness areas, which are most likely to be walker-free. Supply locations are annotated with helpful descriptions — liquor stores, hospitals, gun shops, military bases and cemeteries are just some of the locations highlighted.