E.T., the phone line is open and SETI is waiting for your call. And apparently Jodie Foster, too.

The nonprofit Search for Extraterrestrial Intelligence (SETI) Institute, which was forced earlier this year to shutter its Allen Telescope Array, used to listen for alien signals, due to budget issues, has raised enough money to resume the search for life beyond planet Earth.

The institute reached its goal last week of raising $200,000 to operate the telescope through the end of this year. The funds came from over 2,000 private donors, including the actress Jodie Foster, who played fictional SETI scientist Ellie Arroway in the 1997 movie "Contact."

U.S. Science Funding Will Soon Be Cut Because Of The Debt Deal

US science agencies avoid immediate pain but could be devastated by automatic cuts in 2013.

Scalpel or guillotine? Those are the possible fates in store for US science funding after Congress and the White House reached a deal to cut federal spending and raise the nation's self-imposed debt limit before a 2 August deadline.

The product of tumultuous negotiations, the deal largely spares science in the short term but puts a day of reckoning on the horizon: 2 January 2013. If politicians cannot agree on how to improve the government's fiscal outlook by then through targeted cuts and other means--the scalpel option--their failure will automatically trigger the guillotine: a deep cut applied across a range of expenditures, including research. In the worst case, the automatic cuts could mean shuttered laboratories and mass lay-offs at universities.

My Comment: The cutting has already happened .... look at NASA
Posted by War News Updates Editor at 3:00 PM No comments:

An artist's impression of one of the two Mars rovers, which have been studying geological samples on the planet. Reuters

It travelled at an average speed of 60cm an hour and it has arrived a year late. But the Mars rover Opportunity is finally approaching its destination, the rim of the vast Endeavour crater.

The ageing robotic field geologist has logged more than 32km since it was first parachuted on to the planet's surface in 2003, along with its twin rover Spirit, for a planned three-month mission after their 34 million-mile journey from Earth. Spirit emitted its last signal a year ago after becoming trapped in sand. Opportunity crawled out from a crater in 2008 and headed south to the Endeavour, a two-year journey in theory, which has taken longer because Opportunity had to drive backwards to prevent its front wheel from wearing out.

Scientists said the event took place on the side of the sun that was not facing Earth, so there will be little impact to satellites and communication systems. 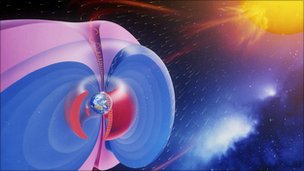 Image: The antiprotons lie sandwiched between the inner and outer Van Allen belts (in red) around the Earth.

A thin band of antimatter particles called antiprotons enveloping the Earth has been spotted for the first time.

The team says a small number of antiprotons lie between the Van Allen belts of trapped "normal" matter.

The researchers say there may be enough to implement a scheme using antimatter to fuel future spacecraft.

Posted by War News Updates Editor at 1:00 PM No comments: 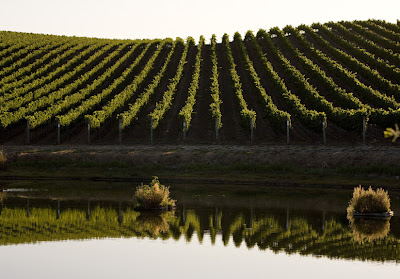 Vineyards in Napa Valley, Calif. Many winemakers use sulfur on their vines and the chemical poses environmental problems. Getty Images

Sulfur applied to vineyards washes into nearby water -- and there's no way to know which vineyards use the chemical.

* Virtually all of the fungicidal sulfur applied to vineyards washes off into nearby bays and river basins.
* Sulfur has a number of potentially concerning consequences for plants, animals and ecosystems.
* For now, there is no good way to know what the environmental impact of your wine might be.

Solar Flare Aug. 4 This still from a video shows the CME lifting off from sunspot 1261. NASA/SDO

A trifecta of sunsplosions over the past few days has prompted government agencies to once again warn of possible power and communications disruptions. The coronal mass ejections could produce a strong aurora as far south as Minnesota and Wisconsin, according to space weather forecasters at NOAA.

Are Office Environment's Bad For Your Brain?

A study has found that the hustle and bustle of modern offices can lead to a 32% drop in workers well being and reduce their productivity by 15%.

They have found that open plan offices create unwanted activity in the brains of workers that can get in the way of them doing the task at hand.

Open plan offices were first introduced in the 1950s and quickly became a popular as a way of laying out offices.

Having a clean and sterile desk can also leave employees with smaller brains, scientists claim.

My Comment: I have to agree .... I was always more productive when I was not faced with distractions .... which an open plan office will provide.
Posted by War News Updates Editor at 7:00 PM No comments: It began as a simple page of links that allowed a group of scientists to share data in the confines of their laboratories.

But in the 20 years since, it has become an inextricable part of the lives of billions of people.

The World Wide Web (WWW) was born on August 6, 1991, when the first web page was launched on the internet by Sir Tim Berners-Lee.

Read more ....
My Comment: I suspect that the web will be around for a little longer.
Posted by War News Updates Editor at 5:00 PM No comments: