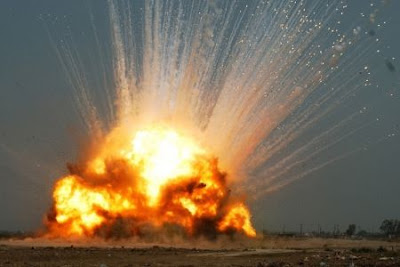 High-Density Reactive Material (HDRM) missiles increase the chances of a "catastrophic kill," according to US military scientists.

The US Office of Naval Research says that it has successfully tested a new type of explosive material that can dramatically increase weapons' impacts.

Missiles made from the high density substance can explode with up to five times the energy of existing armaments.

The material mixes metals and polymers and is said to be as dense as steel but have the strength of aluminum.

Posted by War News Updates Editor at 4:00 AM No comments:

In this undated photo provided by NASA, the Orion space capsule is displayed at a Lockheed Martin test facility in Colorado. (Getty Images / August 12, 2011)

At that price tag, it would fly just twice in the next 10 years, according to internal NASA documents. That could pose big problems for NASA supporters in Congress.

Reporting from Washington — The rocket and capsule that NASA is proposing to return astronauts to the moon would fly just twice in the next 10 years and cost as much as $38 billion, according to internal NASA documents obtained by the Orlando Sentinel.

The money would pay for a new heavy-lift rocket and Apollo-like crew capsule that eventually could take astronauts to the moon and beyond. But it would not be enough to pay for a lunar landing or for more than one manned test flight, in 2021.

Researchers have discovered a new mechanism controlling aging in white blood cells. The research opens up the possibility of temporarily reversing the effects of aging on immunity and could, in the future, allow for the short-term boosting of the immune systems of older people. (Credit: © nyul / Fotolia)

ScienceDaily (Aug. 16, 2011) — Researchers have discovered a new mechanism controlling aging in white blood cells. The research, published in the September issue of the Journal of Immunology, opens up the possibility of temporarily reversing the effects of aging on immunity and could, in the future, allow for the short-term boosting of the immune systems of older people.

Weakened immunity is a serious issue for older people. Because our immune systems become less effective as we age we suffer from more infections and these are often more severe. This takes a serious toll on health and quality of life.

Earth's Gravity Is Being Altered By Melting Glaciers 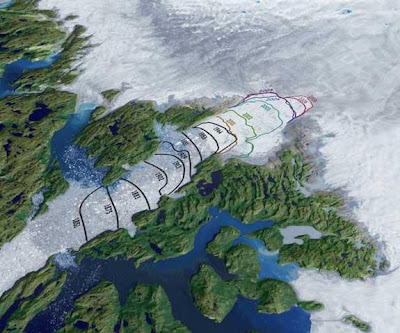 In this image, the location of the successive calving fronts of Greenland's Jakobshavn Isbrae glacier between 1851 and 2009 are overlain on a Landsat image from July 29, 2009. The retreat of the glacier shows the substantial melt that has occurred over the time period. CREDIT: NASA/Goddard Space Flight Center Scientific Visualization Studio

Melting glaciers can alter Earth's gravity field, scientists have found, a discovery that is shedding light on when Greenland and Antarctica began heavily melting.

Knowing the timing of this melting could help climate scientists make better estimates of the potential sea level rise resulting from melting ice pouring off these two massive ice sheets.

My comment: There is no details on how much of a shift in gravity has occurred. My suggestion .... compile the data between summer and winter, and look at the difference.

A One-Armed Personal Robot For The Rest Of Us

PR2 SE Half the arms, nearly half the price. Willow Garage

Willow Garage’s PR2 has provided a unique, open source robotics platform to all kinds of labs and institutions that otherwise wouldn’t have access to a complex robotics system--but not to that many. For all the absolutely cool things you can do with PR2, the $400,000 price tag is prohibitive--only about two dozen commercial and academic labs have their own PR2s. So, in an attempt to make their robot more accessible, Willow Garage is introducing the PR2 SE this week, a pared-down version of the same robot costing a mere $285,000.

We’ve already seen how future ships can be cloaked against sonar, and maybe someday even space and time. Now researchers say they can cloak the ships’ wakes, tricking water itself into acting as though nothing is there.

A new metamaterial cloaking system can trick water into standing still as an object moves through it, by eliminating the shear force and reducing water displacement, Duke University researchers say. This in turn reduces the amount of energy required to move an object — say, a ship — through the water, theoretically saving fuel.

My Comment: And this is the research that they are publicizing .... I would love to know what they are not telling us.
Posted by War News Updates Editor at 2:00 PM No comments:

After years of development and military funding setbacks, defense contractor Lockheed Martin is finally ready to debut its maple seed-inspired drone. The one-winged, one-foot-long SAMARAI drone just flew a test flight for the Associated Press ahead of its official unveiling at an unmanned vehicle conference next week.

The asymmetric UAV is modeled after maple seeds, called samara, that fly off trees and twirl through the air with the utmost efficiency. Originally, the SAMARAI was envisioned as a seed-sized drone that could deliver a 2-gram payload and send back streaming video, but that has since changed to a much bigger, whining drone.

My Comment: It appears that the future for UAVs is to be miniaturized .... the smaller the better.

SETI Project Is Back Online

E.T., you can phone home again.

Forty-two radio telescope dishes near Mount Shasta will again start listening for sounds of intelligent life in the universe this fall after donors -- including actress Jodie Foster -- came up with more than $200,000 to save the Mountain View-based SETI program, made famous by the movie "Contact."

The Allen Telescope Array was shut down in April when the SETI (Search of Extraterrestrial Intelligence) Institute ran short of of money for the project. Space spy: The team made their discovery while working through data from NASA's Kepler spacecraft, one of the world's most powerful telescopes

The exoplanet, known as TrES-2b, reflects less than 1 per cent of light, which makes it darker than any other planet or moon.

The discovery, detailed in the journal Monthly Notices of the Royal Astronomical Society, was made by analysing data from Nasa's Kepler spacecraft, which provides extremely precise measurements on the brightnesses of faraway stars.