If skies are clear Saturday, go out at sunset and look for the giant moon rising in the east. It will be the biggest and brightest one of 2009, sure to wow even seasoned observers.

Earth, the moon and the sun are all bound together by gravity, which keeps us going around the sun and keeps the moon going around us as it goes through phases. The moon makes a trip around Earth every 29.5 days.

But the orbit is not a perfect circle. One portion is about 31,000 miles (50,000 km) closer to our planet than the farthest part, so the moon's apparent size in the sky changes. Saturday night (Jan. 10) the moon will be at perigee, the closest point to us on this orbit.

It will appear about 14 percent bigger in our sky and 30 percent brighter than some other full moons during 2009, according to NASA. (A similar setup occurred in December, making that month's full moon the largest of 2008.)

NASA: Continued Shuttle Use Would Be Risky

(AP) The cost of continuing the life of the U.S. space shuttle past next year's planned retirement is $3 billion a year plus extending the risk of a deadly accident, NASA's chief said Thursday.

NASA Administrator Michael Griffin told an industry group that NASA has looked into what it would take to keep flying the aging shuttle past 2010. Otherwise, it will mean five years of relying on Russia to get astronauts to the international space station.

After the 2003 Columbia tragedy, President George W. Bush declared that the U.S. should head back to the moon in a new spaceship and to pay for that, the space shuttle would have to be retired.

Report: Powerful Solar Storm Could Shut Down U.S. for Months 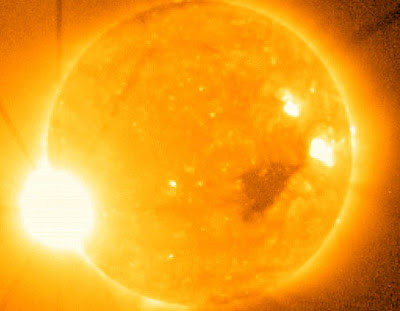 A new study from the National Academy of Sciences outlines grim possibilities on Earth for a worst-case scenario solar storm.

Damage to power grids and other communications systems could be catastrophic, the scientists conclude, with effects leading to a potential loss of governmental control of the situation.

The prediction is based in part on major solar storm in 1859 caused telegraph wires to short out in the United States and Europe, igniting widespread fires.

It was perhaps the worst in the past 200 years, according to the new study, and with the advent of modern power grids and satellites, much more is at risk.

"A contemporary repetition of the [1859] event would cause significantly more extensive (and possibly catastrophic) social and economic disruptions," the researchers conclude. European Space Agency astronaut Christer Fuglesang works during his second spacewalk in 2006. The Sun's ability to shield the solar system from harmful radiation could falter in the early 2020s, increasing the risk of such spacewalks
From The Daily Mail:

Astronauts returning to the moon could be threatened by cosmic rays as a result of the sun becoming less active, scientists have said.

The sun's ability to shield the solar system from harmful radiation could falter in the early 2020s, research from the Swiss Federal Institute of Aquatic Science and Technology claimed.

At about the same time, the American space agency Nasa plans to send astronauts back to the moon.

Photo: An artist's rendition shows how the repulsive Casimir-Lifshitz force between suitable materials in a fluid can be used to quantum mechanically levitate a small object of density greater than the liquid. (Courtesy of the lab of Federico Capasso, Harvard School of Engineering and Applied Sciences/Handout/Reuters)

CHICAGO (Reuters) – U.S. scientists have found a way to levitate the very smallest objects using the strange forces of quantum mechanics, and said on Wednesday they might use it to help make tiny nanotechnology machines.

They said they had detected and measured a force that comes into play at the molecular level using certain combinations of molecules that repel one another.

The repulsion can be used to hold molecules aloft, in essence levitating them, creating virtually friction-free parts for tiny devices, the researchers said.

Federico Capasso, an applied physicist at Harvard University in Massachusetts, whose study appears in the journal Nature, said he believed that detection of this force opened the possibility of a whole new class of tiny gadgets.

What Science Says About Enlightened Sex By Sally Law, Special to LiveScience

Women who practiced the Eastern techniques of mindfulness and yoga reported improvements in levels of arousal and desire, as well as better orgasms. Image credit: Dreamstime
From Live Science:

Another year, another batch of resolutions: eat right, exercise more, pay bills on time etc. All good in theory, but potentially dull in practice.

In 2009, then, resolve to have better sex. According to a recent review article in the Dec. 3 issue of The Journal of Sexual Medicine, sexually unsatisfied women who practiced the Eastern techniques of mindfulness and yoga reported improvements in levels of arousal and desire, as well as better orgasms. In addition, yoga has been found to effectively treat premature ejaculation in men.

Eastern practices have been touted as sexually beneficial for years — as the article states, the techniques have "their origin in the Kama Sutra of the fourth to sixth centuries."

Breakthroughs That Will Change Everything 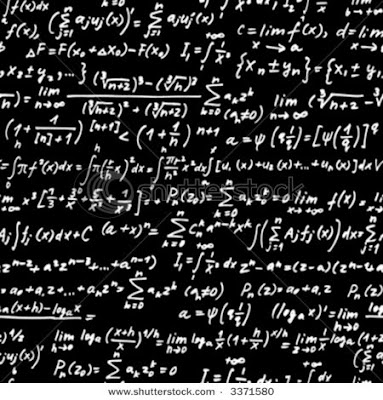 Will humans go extinct? Or will we instead evolve into divergent species? Can we stop killing each other? Perhaps old-fashioned wisdom will return and save the day.

These are just some of the compelling thoughts generated when the forward-thinking Edge Foundation recently asked scientists, authors, futurists, journalists and other offbeat thinkers the question: "What will change everything?" To refine the question, Edge further asked: "What game-changing scientific ideas and developments do you expect to live to see?"

Among the dozens of responses, from such diverse sources as Alan Alda (actor and now TV science personality) to Ian Wilmut (cloned Dolly the sheep), LiveScience picked out five, each notable for its ingenuity and ability to provoke thought.

Is Anybody In Charge Of Keeping Satellites From Colliding?

From The Straight Dope:

As I stare into the beautiful dark sky above my home in Hawaii and see all the stars and satellites, I ponder the possibility of "space accidents." With all those satellites up there, are there any collisions? I don't suppose anybody is handing out OUIs (for orbiting under the influence), but how do they decide what satellite should go where? Who oversees all those orbits? Is it just a stellar free-for-all?

No, but it's not iron discipline either. To date we've been content to let just about anybody heave stuff into orbit, requiring only minimal reporting for most launches. But with increasing commercialization of space, things are starting to get crowded up there — the Union of Concerned Scientists lists 898 active satellites, operated by everybody from the U.S. to Luxembourg. Given the vastness of space, even in earth's immediate vicinity, it's not like we're talking bumper-to-bumper traffic.

73.4 Percent of All Wikipedia Edits Are Made By Roughly 1,400 People 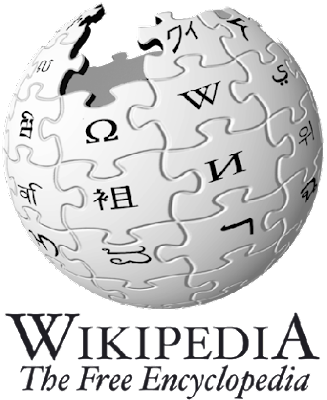 From College On The Record:

Most college professors discourage students from using Wikipedia as a reliable source of information, and if you’ve ever wondered why, here is the reason:

There are millions of people who browse Wikipedia in any given month, but only 2 percent of them (roughly 1,400) are responsible for editing nearly 75 percent of the information on the entire website.

In other words, Wikipedia, while editable by anyone, is fueled almost entirely by the knowledge of a small, select group of individuals.

Consider them the Illuminati of Wikipedia; they control the flow of information that often finds its way into our college essays, despite our professors’ best attempts to dissuade us from citing it.

The source of this startling revelation? The face of Wikipedia, Jimbo Wales.

But, [Wales] insisted, the truth was rather different: Wikipedia was actually written by "a community ... a dedicated group of a few hundred volunteers" where "I know all of them and they all know each other". Really, "it's much like any traditional organization."