Science Closing In On Cloak Of Invisibility

WASHINGTON (AP) - They can't match Harry Potter yet, but scientists are moving closer to creating a real cloak of invisibility.

Researchers at Duke University, who developed a material that can "cloak" an item from detection by microwaves, report that they have expanded the number of wavelengths they can block.

Last August the team reported they had developed so-called metamaterials that could deflect microwaves around a three-dimensional object, essentially making it invisible to the waves.

The system works like a mirage, where heat causes the bending of light rays and cloaks the road ahead behind an image of the sky.

The researchers report in Thursday's edition of the journal Science that they have developed a series of mathematical commands to guide the development of more types of metamaterials to cloak objects from an increasing range of electromagnetic waves. Beam me up: Mysterious columns of light stream into the air above the town of Sigulda
From The Daily Mail:

These stunning images show mysterious columns of light streaming into the sky above the town of Sigulda in Latvia at the end of last month.

Taken by designer Aigar Truhins with a standard digital camera, the photographs have prompted excited online discussions among amateur astronomists all over the internet.

'My son exclaimed, 'The aliens are coming!'' Truhins was quoted as saying.

This artist's impression shows the star OGLE-TR-56 and its planet, as it passes behind the star. (Credit: Copyright D. Sing (IAP) / A&A)
From Science Daily:

ScienceDaily (Jan. 15, 2009) — Two independent groups have simultaneously made the first-ever ground-based detection of extrasolar planets thermal emissions. Until now, virtually everything known about atmospheres of planets orbiting other stars in the Milky Way has come from space-based observations.

These new results open a new frontier to studying these alien worlds and are especially critical because the major space-based workhorse to these studies, the Spitzer telescope, will soon run out of cryogens, highly limiting its capabilities.

How Birds Can Down a Jet Airplane

Early reports suggest that a bird strike caused a jet plane to crash in the Hudson River near Manhattan today, leaving questions about how a little flying animal could down a big airliner.

More than 200 people have been killed worldwide as a result of wildlife strikes with aircraft since 1988, according to Bird Strike Committee USA, and more than 5,000 bird strikes were reported by the U.S. Air Force in 2007. Bird strikes, or the collision of an aircraft with an airborne bird, tend to happen when aircraft are close to the ground, which means just before landing or after take-off, when jet engines are turning at top speeds. NASA's latest findings have been heralded as the strongest indicator yet of life on Mars
From The Daily Mail:

The prospect of finding life on Mars came a step closer yesterday after Nasa revealed it had discovered 'plumes' of methane gas seeping from the planet.

When methane was first found in the Martian atmosphere in 2003, some scientists claimed it could have been dumped on the planet by comets.

But the latest discovery is proof that it is actually produced on the Red Planet.

The pinpointing of the location of the plumes of gas also offers scientists likely places to dig for life.

Nasa's announcement yesterday is highly significant because most of the methane on Earth is produced by living organisms - raising the possibility that some form of life, even if just microbes, are alive deep within the soil.

Inside the Savant Mind: Tips for Thinking from an Extraordinary Thinker Daniel Tammet is the author of two books, Born on a Blue Day and Embracing the Wide Sky, which comes out this month. He’s also a linguist and holds the European record for reciting the first 22,514 decimal points of the mathematical constant Pi. Mind Matters editor Jonah Lehrer chats with Tammet about how his memory works, why the IQ test is overrated, and a possible explanation for extraordinary feats of creativity.

People with a higher caffeine intake, from sources such as coffee, tea and caffeinated energy drinks, are more likely to report hallucinatory experiences such as hearing voices and seeing things that are not there. (Credit: iStockphoto/Ong Kok Keat)
From Science Daily:

High caffeine consumption could be linked to a greater tendency to hallucinate, a new research study suggests.

People with a higher caffeine intake, from sources such as coffee, tea and caffeinated energy drinks, are more likely to report hallucinatory experiences such as hearing voices and seeing things that are not there, according to the Durham University study.

‘High caffeine users’ – those who consumed more than the equivalent of seven cups of instant coffee a day - were three times more likely to have heard a person’s voice when there was no one there compared with ‘low caffeine users’ who consumed less than the equivalent of one cup of instant coffee a day. With ninety per cent of North Americans consuming some of form caffeine every day, it is the world's most widely used drug. 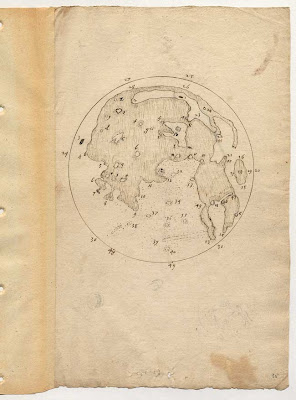 (Click The Image To Enlarge)
Thomas Harriot's map of the whole Moon, made after looking through an early telescope. This image accurately depicts many lunar features including the principal Maria (lunar 'seas' - actually lava-filled basins) and craters. Labelled features include Mare Crisium ('18') on the right hand side and the craters Copernicus ('b') and Kepler ('c') in the upper left of the disk. Credit: © Lord Egremont
From Live Science:

Galileo Galilei is often credited with being the first person to look through a telescope and make drawings of the celestial objects he observed. While the Italian indeed was a pioneer in this realm, he was not the first.

Englishman Thomas Harriot made the first drawing of the moon after looking through a telescope several months before Galileo, in July 1609.

Historian Allan Chapman of the University of Oxford details that 400-year-old breakthrough in astronomy in the February 2009 edition of Astronomy and Geophysics, a journal of the Royal Astronomical Society.

Revealed: Why Beautiful Women Are More Likely To Be Unfaithful... It's The Marilyn Hormone Marilyn Monroe's hourglass figure was caused by the same hormone
that triggered her affairs according to scientists
From The Daily Mail:

With her drop-dead curves, Marilyn Monroe's voluptuous hourglass figure has long been regarded as the absolute essence of what it means to be a sexy woman.

But the female hormone that made the film star so desirable was the key behind her inability to hold down a steady relationship, according to scientists.

Those with the most oestradiol, a form of oestrogen, are usually more physically attractive and find it easier to snare a man.

But they are also less satisfied with their current lovers - and therefore more likely to cheat, according to the findings published in the Royal Society's journal Biology Letters.

Misuse Of Vicks VapoRub May Harm Infants And Toddlers 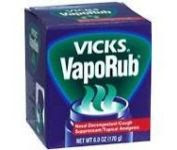 Vicks® VapoRub®, the popular salve used to relieve symptoms of cough and congestion, may be harmful for infants and toddlers. New research appearing in the January issue of CHEST, the peer-reviewed journal of the American College of Chest Physicians (ACCP), shows that Vicks® VapoRub® (VVR) may stimulate mucus production and airway inflammation, which can have severe effects on breathing in an infant or toddler. Research findings are consistent with current VVR labeling which indicates the product should not be used on children under 2 years of age. "The ingredients in Vicks can be irritants, causing the body to produce more mucus to protect the airway," said Bruce K. Rubin, MD, FCCP, the study's lead author from the Department of Pediatrics at Wake Forest University School of Medicine, Winston Salem, NC. "Infants and young children have airways that are much narrower than those of adults, so any increase in mucus or inflammation can narrow them more severely."

Is A 'Katrina-Like' Space Storm Brewing? 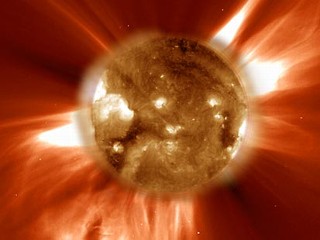 In this file photo, the sun-orbiting SOHO spacecraft has imaged many erupting filaments lifting off the active solar surface and blasting enormous bubbles of magnetic plasma into space. U.S. scientists worry we aren't ready for a solar space storm which could knock out our electricity, cell phones, even our water supply. Collapse. (Courtesy NASA/JPL )
From ABC News:

Scientists Worry We Aren't Prepared for Event That Could Zap Government, Cost Trillions.

U.S. scientists worry we aren't ready for a solar space storm that could knock out our electricity, our cell phones, even our water supply.

The chances of that happening are small, but it is a possibility as we move into an active period of solar storms.

How do they know? Well, it's happened before. Back in 1859, a solar eruption resulted in telegraph wires burning up.

Of course, the world is now covered in wires and wireless devices that could be vulnerable.

The National Academy of Sciences (NAS) gathered experts from around the country to look at the economic and social costs from these space storms. While they didn't make any recommendations, the scientists hope their report is a wake-up call.

Chew On This: We'll Soon Be Able To Grow Replacement Teeth

A liquid-nitrogen tank is used to preserve tooth pulp. The first whole tooth may be grown in a human within five to 10 years. The Washington Post
From The Seattle Times:

It turns out wisdom teeth are prolific sources of adult stem cells needed to grow new teeth for you. From scratch. In your adult life, as you need them. In the near future. According to the National Institutes of Health.

WASHINGTON — As long as there are hockey players, there will be niche markets for false teeth. But the real news about the future of dentures is that there isn't much of one.

Toothlessness has declined 60 percent in the United States since 1960. Baby boomers will be the first generation in human history typically to go to their graves with most of their teeth.

And now comes tooth regeneration: growing teeth in adults, on demand, to replace missing ones. Soon.

ScienceDaily (Jan. 12, 2009) — A NASA-funded study describes how extreme solar eruptions could have severe consequences for communications, power grids and other technology on Earth.

The National Academy of Sciences in Washington conducted the study. The resulting report provides some of the first clear economic data that effectively quantifies today's risk of extreme conditions in space driven by magnetic activity on the sun and disturbances in the near-Earth environment. Instances of extreme space weather are rare and are categorized with other natural hazards that have a low frequency but high consequences.

Bighorn sheep are one of many species now documented as getting smaller, on average, due to trophy hunting that targets larger specimens and leaves smaller members of a population, and their genes, to reproduce. Image credit: Paul Paquet
From Live Science:

Acting as super-predators, humans are forcing changes to body size and reproductive abilities in some species 300 percent faster than would occur naturally, a new study finds.

Hunting and fishing by individual sportsmen as well as large-scale commercial fishing are also outpacing other human influences, such as pollution, in effects on the animal kingdom. The changes are dramatic and may put the survival of some species in question.

In a review of 34 studies that tracked 29 species across 40 different geographic systems, harvested and hunted populations are on average 20 percent smaller in body size than previous generations, and the age at which they first reproduce is on average 25 percent earlier.

(Click The Above Image To Enlarge)
The National Climatic Data Center has a huge graphic that summarizes the big weather moments on the planet last year.
Posted by War News Updates Editor at 12:30 PM No comments: