What Happened To The USS Scorpion? 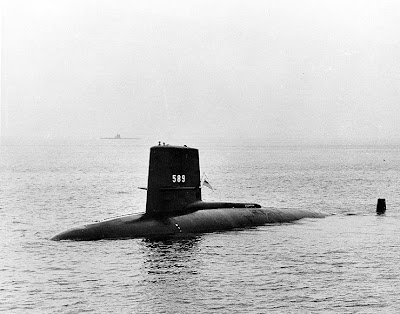 USS Scorpion (SSN-589). Wikipedia
Experts Out To Solve Deep-Sea Mystery Of The USS Scorpion -- USA Today
Shipwreck disaster experts are calling for a deep-sea expedition to a lost U.S. nuclear attack sub, the USS Scorpion, in an effort to verify a new theory on what caused the Cold War vessel to sink.

The Scorpion was lost May 22, 1968, killing 99 men, about 400 miles south of the Azores Islands in the middle of the Atlantic Ocean. The sub has been inspected by undersea recovery teams, including a visit in 1985 by oceanographer Robert Ballard before his team's discovery of the Titanic shipwreck.

My Comment: I am surprised that it has taken them this long to make the decision to now go out and find the definitive answer on why did the USS Scorpion sink to the bottom of the Atlantic in 1968.
Posted by War News Updates Editor at 7:00 AM