Taking Cues From Medical Tech, Big Oil Could Use Nanoparticles to Hunt for Leftover Crude in Spent Wells

Using Nanotech to Reach Every Drop of Oil Flcelloguy via Wikimedia
From Popular Science:

You can't throw a rock in the realm of biotech right now without hitting some scheme or another for tapping the unique properties of nanoparticles to hunt tumors, target drug delivery, or monitor the body internally for specific biomarkers. But a perhaps unlikely field of scientific exploration is also tapping these nano-biotechnology applications to search for the elusive hydrocarbons that are its lifeblood: the oil industry.

Can Nanotechnology Save Lives?

Finding George Whitesides is often tricky even for George Whitesides. So he keeps an envelope in his jacket pocket. “I don’t actually know where I am in general until I look at it,” he says, “and then I find that I’m in Terre Haute, and then the question really is, ‘What’s next?’” During a recent stretch, the envelope revealed that he was in Boston, Abu Dhabi, Mumbai, Delhi, Basel, Geneva, Boston, Copenhagen, Boston, Seattle, Boston, Los Angeles and Boston.

While scientists have become rather adept at transforming generic skin cells into specialized organ cells, crafting the organs themselves has proven far more difficult. Since the 3-D architecture of most organs is as important to their function as their cellular makeup, 2-D cell cultures are not very useful for building a replacement heart from scratch. To solve that problem, most organ makers create a scaffolding for the cells to grow on. 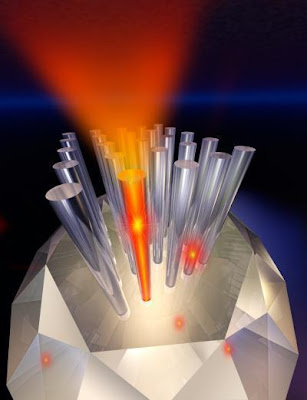 A diamond-based nanowire device. Researchers used a top-down nanofabrication technique to embed color centers into a variety of machined structures. By creating large device arrays rather than just "one-of-a-kind" designs, the realization of quantum networks and systems, which require the integration and manipulation of many devices in parallel, is more likely. (Credit: Illustrated by Jay Penni.)
From Science Daily:

Science Daily (Feb. 15, 2010) — By creating diamond-based nanowire devices, a team at Harvard has taken another step towards making applications based on quantum science and technology possible.

The new device offers a bright, stable source of single photons at room temperature, an essential element in making fast and secure computing with light practical.

BEIJING: Scientists have developed nanotechnology that purifies water using only visible light, it continues working in the dark and it kills the tougher microbes to boot.

Light is often used as a water purifier and existing methods rely on processes stimulated by ultraviolet (UV) light.

But UV accounts for just 5% of daylight so a method using visible light — which accounts for almost half — is more desirable.

The molecular motorcar on the left, called a "nanodragster," could spur new nanotechnologies such as factories that build products atom-by-atom. Credit: American Chemical Society
From Live Science:

Researchers have built a new super-small "nanodragster" that improves on prior nanocar designs and could speed up efforts to craft molecular machines.

"We made a new version of a nanocar that looks like a dragster," said James Tour, a chemist at Rice University who was involved in the research. "It has smaller front wheels on a shorter axle and bigger back wheels on a longer axle."

Britain is on the brink of a massive expansion in foods containing controversial 'grey goo' nanoparticles, according to the former head of the Food Standards Agency.

However, he and other peers believe there will be no requirement for the hi-tech products to be labelled as containing nanoparticles - microscopic compounds that can worm their way into the brain, liver and kidneys with unknown consequences.

Vacuum's emptiness doesn't just pose a problem for space travelers -- a vacuum lining is also one of the best known insulators on Earth, and may help keep those holiday drinks and soups warm in your thermos. Now scientists have found that layering photonic crystals within the vacuum lining can even prevent heat loss from invisible infrared radiation. 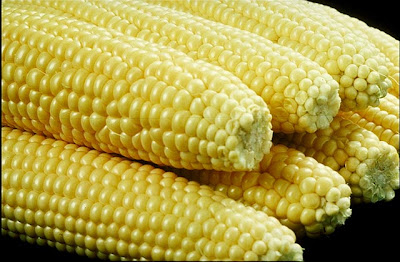 Science Daily (Dec. 9, 2009) — Using a nanoparticle from corn, a Purdue University scientist has found a way to lengthen the shelf life of many food products and sustain their health benefits.

Yuan Yao, an assistant professor of food science, has successfully modified the phytoglycogen nanoparticle, a starchlike substance that makes up nearly 30 percent of the dry mass of some sweet corn. The modification allows the nanoparticle to attach to oils and emulsify them while also acting as a barrier to oxidation, which causes food to become rancid. His findings were published in the early online version of the Journal of Agricultural and Food Chemistry.

a) Colored scanning electron microscope image of the measured device. Aluminum top gate is used to induce a two-dimensional electron layer at the silicon-silicon oxide interface below the metallization. The barrier gate is partially below the top gate and depletes the electron layer in the vicinity of the phosphorus donors (the red spheres added to the original image). The barrier gate can also be used to control the conductivity of the device. All the barrier gates in the figure form their own individual transistors. (b) Measured differential conductance through the device at 4 Tesla magnetic field. The red and the yellow spheres illustrate the spin-down and -up states of a donor electron which induce the lines of high conductivity clearly visible in the figure. (Credit: American Chemical Society)
From Science Daily:

Science Daily (Dec. 7, 2009) — Researchers from Helsinki University of Technology (Finland), University of New South Wales (Australia), and University of Melbourne (Australia) have succeeded in building a working transistor, whose active region composes only of a single phosphorus atom in silicon.

Researchers are closer to using tiny devices called semiconducting nanowires to create a new generation of ultrasmall transistors and more powerful computer chips. The researchers have grown the nanowires with sharply defined layers of silicon and germanium, offering better transistor performance. As depicted in this illustration, tiny particles of a gold-aluminum alloy were alternately heated and cooled inside a vacuum chamber, and then silicon and germanium gases were alternately introduced. As the gold-aluminum bead absorbed the gases, it became "supersaturated" with silicon and germanium, causing them to precipitate and form wires. (Credit: Purdue University, Birck Nanotechnology Center/Seyet LLC)
From Science Daily:

Science Daily (Dec. 3, 2009) — A new generation of ultrasmall transistors and more powerful computer chips using tiny structures called semiconducting nanowires are closer to reality after a key discovery by researchers at IBM, Purdue University and the University of California at Los Angeles.

The snowman is made of two tiny tin beads, normally used to calibrate electron microscope lenses, which were welded together with platinum Photo: Dr Cox / National Physical Laboratory
From The Telegraph:

Scientists have created the world’s smallest 'snowman', measuring about a fifth of the width of a human hair.

Experts at the National Physical Laboratory in West London made the miniature figure which is just 0.01mm across.

However, far from the thrill of rolling balls of snow around a field to build their masterpiece, it was assembled using tools designed for manipulating nanoparticles. 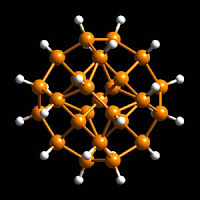 PITTSBURGH—A University of Pittsburgh team overcame a major hurdle plaguing the development of nanomaterials such as those that could lead to more efficient catalysts used to produce hydrogen and render car exhaust less toxic. The researchers reported Nov. 29 in Nature Materials the first demonstration of high-temperature stability in metallic nanoparticles, the vaunted next-generation materials hampered by a vulnerability to extreme heat.

Nanoparticles Could Damage DNA At A Distance, Study Suggests 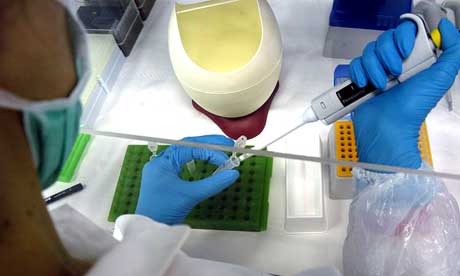 Doses of nanoparticles used in the study were higher than anything a human might be exposed to.
Photograph: Getty Images
From The Guardian:

Lab tests show that metal nanoparticles can affect DNA without actually coming into contact with it – though the results are difficult to extrapolate to the human body.

Nanoparticles of metal can damage the DNA inside cells even if there is no direct contact between them, scientists have found. The discovery provides an insight into how the particles might exert their influence inside the body and points to possible new ways to deliver medical treatments.

An aluminum plate glazed with Gao's superhydrophobic coating (left) repelling the supercooled water. For the uncoated plate (right), the water freezes on contact and ice accumulates. (Credit: Image courtesy of University of Pittsburgh)
From Science Daily:

Science Daily (Oct. 30, 2009) — Preventing the havoc wrought when freezing rain collects on roads, power lines, and aircrafts could be only a few nanometers away. A University of Pittsburgh-led team demonstrates in the Nov. 3 edition of "Langmuir" a nanoparticle-based coating developed in the lab of Di Gao, a chemical and petroleum engineering professor in Pitt's Swanson School of Engineering, that thwarts the buildup of ice on solid surfaces and can be easily applied.

Science Daily (Oct. 22, 2009) — With potential adverse health and environmental effects often in the news about nanotechnology, scientists in Arkansas are reporting that carbon nanotubes (CNTs) could have beneficial effects in agriculture. Their study, scheduled for the October issue of ACS Nano, found that tomato seeds exposed to CNTs germinated faster and grew into larger, heavier seedlings than other seeds. That growth-enhancing effect could be a boon for biomass production for plant-based biofuels and other agricultural products, they suggest.

Labs-On-A-Chip That You Can Shrink To Fit

INTEL's latest microchip technology has created transistors 22 nanometres wide - a mere 200 times the width of a hydrogen molecule. Carving such tiny features is devilishly difficult and expensive, but in another realm of microchips altogether, something odd is happening: chips are being made on an outsized scale and then shrunk to the required size, avoiding much fiddly hassle.

The shrinking innovation is happening in the field of the "lab-on-a-chip". Such chips are typically plastic slivers scored with serried ranks of fluid-filled microchannels and recessed pools for chemical reactions to occur in; they are often replete with deposits of chemicals, cells and proteins of interest.

The Era of Nanoparticle Drugs Begins With Erection Cream

Over a thousand years ago, Mesopotamian artisans stumbled on a new way to add a special sheen to their ceramics: using microscopic pieces of metal. This "luster" was the first known use of nanoparticles—tiny objects that are less than 100 nanometers long in all three dimensions. In modern times, nanoparticles have emerged as a useful tool in medicine, with uses from providing the active ingredient in sunscreen (nano-scale particles of titanium dioxide), to stimulating blood vessel growth as an aid to healing, to delivering the key ingredients in artificial hearts (nanocrystalline zirconium oxide) and brain imaging (magnetic nanoparticles).