The Future Of Energy In North America Is Tight Oil

With companies like Devon Energy Corp., Talisman Energy Inc., Encana Corp., Exxon Mobil Corp. pushing big spending toward tight oil, analysts are ratcheting up their production forecasts for the supplies, which are largely based in the United States.

Wireless Recharging For Mobile Phones By 2012

Messy wires and cables will soon be a thing of the past Photo: CORBIS
From The Telegraph:

Mobile phone users will be able to charge their devices wirelessly for the first time from 2012.

Fujitsu, the Japanese technology company, has created a system capable of simultaneously charging multiple portable electronic devices such as mobile phones, digital cameras and laptop computers without the need for cable connections.

Mining The Truth On Coal Supplies 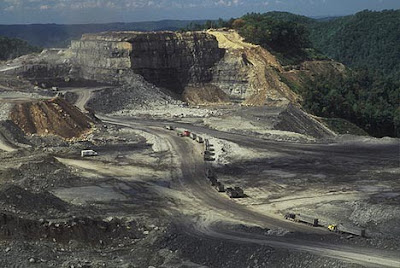 A view that the world’s leading electricity fuel—and major contributor to climate change—is running out.

This story is part of a special series that explores energy issues. For more, visit The Great Energy Challenge.

No matter how bad coal might be for the planet, the conventional wisdom is that there is so much of it underground that the world’s leading fuel for electricity will continue to dominate the energy scene unless global action is taken on climate change.

But what if conventional wisdom is wrong?

A new study seeks to shake up the assumption that use of coal, the most carbon-intensive fossil fuel, is bound to continue its inexorable rise. In fact, the authors predict that world coal production may reach its peak as early as next year, and then begin a permanent decline.

A new transport method involving ice crystals could make it practical to get natural gas from remote areas, with no worries about explosions.

Storing and shipping natural gas by trapping it in ice--using technology being developed by researchers at the U.S. Department of Energy--could cut shipping costs for the fuel, making it easier for countries to buy natural gas from many different sources, and eventually leading to more stable supplies worldwide.

Taking Cues From Medical Tech, Big Oil Could Use Nanoparticles to Hunt for Leftover Crude in Spent Wells

Using Nanotech to Reach Every Drop of Oil Flcelloguy via Wikimedia
From Popular Science:

You can't throw a rock in the realm of biotech right now without hitting some scheme or another for tapping the unique properties of nanoparticles to hunt tumors, target drug delivery, or monitor the body internally for specific biomarkers. But a perhaps unlikely field of scientific exploration is also tapping these nano-biotechnology applications to search for the elusive hydrocarbons that are its lifeblood: the oil industry. 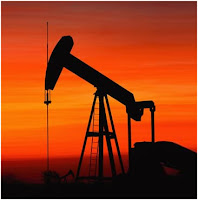 But our country is neglecting a field central to our national prospect and security: energy. Although the information technology and pharmaceutical industries spend 5 to 15 percent of their revenue on research and development each year, U.S. companies' spending on energy R&D has averaged only about one-quarter of 1 percent of revenue over the past 15 years.

And despite talk about the need for "21st-century" energy sources, federal spending on clean energy research -- less than $3 billion -- is also relatively small. Compare that with roughly $30 billion that the U.S. government annually spends on health research and $80 billion on defense research and development. 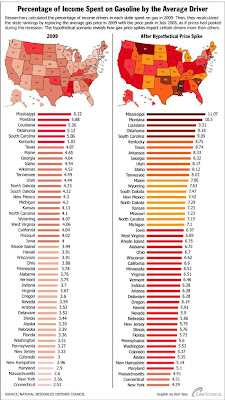 (Click Image To Enlarge)
Gas Prices as a percent of income varies by state. See how each state fares. Credit: Karl Tate/LiveScience
From Live Science:

Everyone grumbles when prices at the pump rise, but some drivers pay more depending on where they live. A new study shows how gas price spikes hurt the wallets of drivers in some states more than in others.

On average, Mississippi drivers spent more than 6 percent of their annual income on gas in 2009, compared to drivers in Connecticut and New York who spent just 2.5 percent of their income on gas. But a price spike similar to the one in July 2008 would have worsened the imbalance — Mississippi drivers would have seen driving costs shoot up to 11 percent as opposed to just 4.3 percent for Connecticut and New York. [See gas prices in your state.] 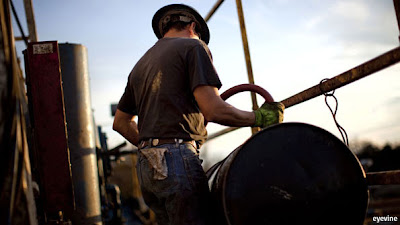 Newly economic, widely distributed sources are shifting the balance of power in the world’s gas markets.

SOME time in 2014 natural gas will be condensed into liquid and loaded onto a tanker docked in Kitimat, on Canada’s Pacific coast, about 650km (400 miles) north-west of Vancouver. The ship will probably take its cargo to Asia. This proposed liquefied natural gas (LNG) plant, to be built by Apache Corporation, an American energy company, will not be North America’s first. Gas has been shipped from Alaska to Japan since 1969. But if it makes it past the planning stages, Kitimat LNG will be one of the continent’s most significant energy developments in decades.

Our transition away from fossil fuels will take decades—if it happens at all.

During the early 1970s we were told by the promoters of nuclear energy that by the year 2000 America’s coal-based electricity generation plants would be relics of the past and that all electricity would come from nuclear fission. What’s more, we were told that the first generation fission reactors would by then be on their way out, replaced by super-efficient breeder reactors that would produce more fuel than they were initially charged with.

Transition to new energy sources is unavoidable, but here are five sobering first principles to remember along the way.

Are we about to switch to new energy sources? Grandiose plans are being drawn up for installing veritable forests of giant wind turbines, turning crops and straw into fuel ethanol and biodiesel, and for tapping solar radiation by fields of photovoltaic cells. As with most innovations, there is excitement and high expectation. Will these developments and other renewable energy conversions one day replace fossil fuels? Eventually they will have to, but a reality check is in order. 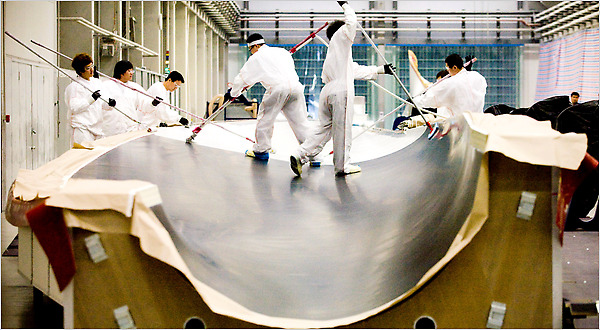 TIANJIN, China — China vaulted past competitors in Denmark, Germany, Spain and the United States last year to become the world’s largest maker of wind turbines, and is poised to expand even further this year.

China has also leapfrogged the West in the last two years to emerge as the world’s largest manufacturer of solar panels. And the country is pushing equally hard to build nuclear reactors and the most efficient types of coal power plants.

These efforts to dominate renewable energy technologies raise the prospect that the West may someday trade its dependence on oil from the Mideast for a reliance on solar panels, wind turbines and other gear manufactured in China.

The Year In Energy

From The Technology Review:

Liquid batteries, giant lasers, and vast new reserves of natural gas highlight the fundamental energy advances of the past 12 months.

With many renewable energy companies facing hard financial times ("Weeding Out Solar Companies"), a lot of the big energy news this year was coming out of Washington, DC, with massive federal stimulus funding for batteries and renewable energy and programs such as Energy Frontier Research Centers and Advanced Research Projects Agency-Energy ("A Year of Stimulus for High Tech").

Paper Battery Could Power Gadgets Of The Future The light-weight battery is created by painting nanotube ink onto paper
From the Daily Mail:

Ordinary paper could one day be used as ultra-lightweight, bendable batteries, according to scientists from Stanford University.

Simply coating a sheet of paper with ink made of silver and carbon nanomaterials makes an efficient storage device that is 10 times as powerful as lithium-ion batteries used to power laptops. 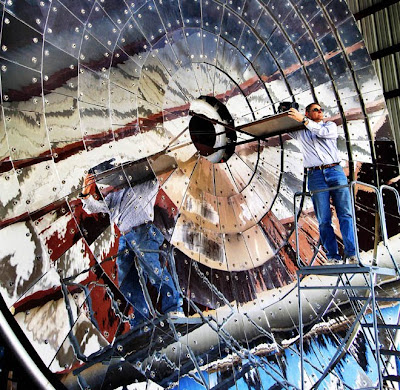 The Advanced Research Projects Agency for energy put out its second call for new ideas, and this time, the agency has narrowed its focused to three research fields.

The new arm of the Department of Energy, which is dedicated to high-risk, high-reward innovations, is betting $100 million on batteries for cars, new materials for capturing carbon, and microorganisms that can convert sunlight and carbon dioxide directly into fuels.

A Self-Sufficient Energy Mix Wind turbines deployed in conjunction with solar energy and a series of furnaces burning straw and wood chips manage to heat and power the entire island of Samso with energy to spare. Harvey McDaniel
From Popular Science:

For centuries now, civilization has been working toward an unsustainable future, burning fossil fuels for heat and electricity and creating a way of life that is a model of inefficiency. The tiny Danish island of Samso is leading the way back to sustainability, becoming the one of the first industrialized places in the world to qualify as completely energy self-sufficient. 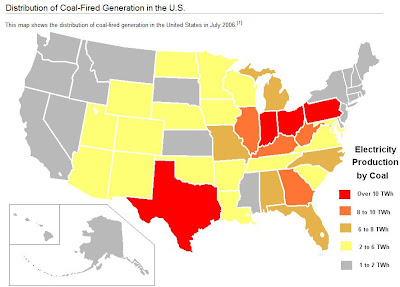 From The Next Big Future:

Map of coal power by state. Note: about of third of the air pollution can go thousands of miles from the plant. There is more impact on air quality and health of those near the plants. Air pollution has been improved in the USA since the 1950s and 1960s. There is still a negative effect. 24,000 coal impacted deaths and a total of 60,000 air pollution impacted deaths out of 2.5 million deaths from any cause. Cigarette smoking and obesity have larger negative effects, which is seen in West Virginia's health statistics. The bad air pollution states are ending up at or near the bottom of state health rankings.

Science Daily (Nov. 25, 2009) — Scientists at the Carnegie Institution have found for the first time that high pressure can be used to make a unique hydrogen-storage material. The discovery paves the way for an entirely new way to approach the hydrogen-storage problem.

Paper-Thin Batteries Made From Algae 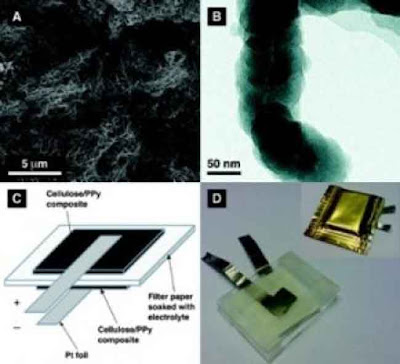 Batteries made of paper may power electronics in the future, researchers say. Shown are images from an experimental paper-based battery. Credit: The American Chemical Society.
From Live Science:

Imagine wrapping paper that could be a gift in and of itself because it lights up with words like "Happy Birthday." That is one potential application of a new biodegradable battery made of cellulose, the stuff of paper.

Scientists worldwide are striving to develop thin, flexible, lightweight, inexpensive, environmentally friendly batteries made entirely from nonmetal parts. Among the most promising materials for these batteries are conducting polymers. From The Houston Chronicle:

What city contributed most to the making of the modern world? The Paris of the Enlightenment and then of Napoleon, pioneer of mass armies and nationalist statism? London, seat of parliamentary democracy and center of finance? Or perhaps Titusville, Pa.

Oil seeping from the ground there was collected for medicinal purposes — until Edwin Drake drilled and 150 years ago — Aug. 27, 1859 — found the basis of our world, 69 feet below the surface of Pennsylvania, which oil historian Daniel Yergin calls “the Saudi Arabia of 19th-century oil.”

For many years, most oil was used for lighting and lubrication, and the amounts extracted were modest. Then in 1901, a new well named for an East Texas hillock, Spindletop, began gushing more per day than all other U.S. wells combined.

Since then, America has exhausted its hydrocarbon supplies.

The Military Is Looking For A 25-Year Battery

Photo: Nuclear power: The package inside this prototype betavoltaic battery contains layers of silicon carbide and metal foil embedded with the radioactive isotope tritium. When high-energy electrons emitted by the decay of tritium hit the silicon carbide, it produces an electrical current that exits the cell through the metal pins. Such batteries are designed to last 25 years. Credit: Widetronix

Long-lived nuclear batteries powered by hydrogen isotopes are in testing for military applications.

Batteries that harvest energy from the nuclear decay of isotopes can produce very low levels of current and last for decades without needing to be replaced. A new version of the batteries, called betavoltaics, is being developed by an Ithaca, NY-based company and tested by Lockheed Martin. The batteries could potentially power electrical circuits that protect military planes and missiles from tampering by destroying information stored in the systems, or by sending out a warning signal to a military center. The batteries are expected to last for 25 years. The company, called Widetronix, is also working with medical-device makers to develop batteries that could last decades for implantable medical devices.