The Future Of Surgical Robotics Is Microscopic 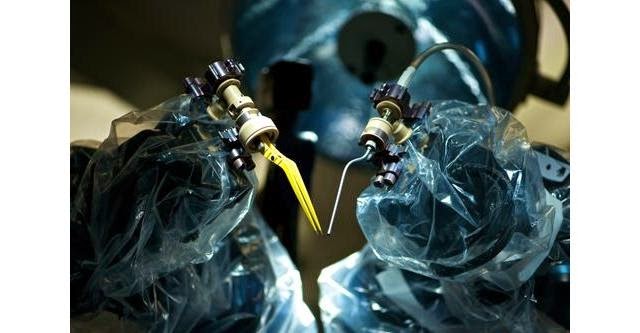 The NeuroArm, a non-ferrous microsurgical robot—shown here with an electrified cutting tool and suction instrument—was used to remove a patient's brain tumor in 2008, while she was being scanned with an MRI. University of Calgary

Chances are, you aren’t, and never will be, an astronaut. So the recent revelation that NASA is funding the development of a somewhat gruesome-sounding surgical bot—a fist-size contraption that would enter a patient’s gas-engorged abdomen to staunch bleeding or remove a ruptured appendix—isn’t exactly news you can use. The more relevant announcement might be from Intuitive Surgical, which announced that its newest robo-surgeon has been approved by the FDA. With thinner and more maneuverable arms, the da Vinci Xi will turn more open surgeries into minimally-invasive, robot-assisted procedures. Instead of requiring large incisions to get at various portions of a patient’s anatomy, the Xi will let surgeons reach essentially anywhere in the abdomen through smaller less traumatic punctures. With this clearance, the likelihood that you’ll one day be under the robotic knife just jumped significantly.

My Comment: A good review on robotic advances in microsurgery.
Posted by War News Updates Editor at 3:00 AM