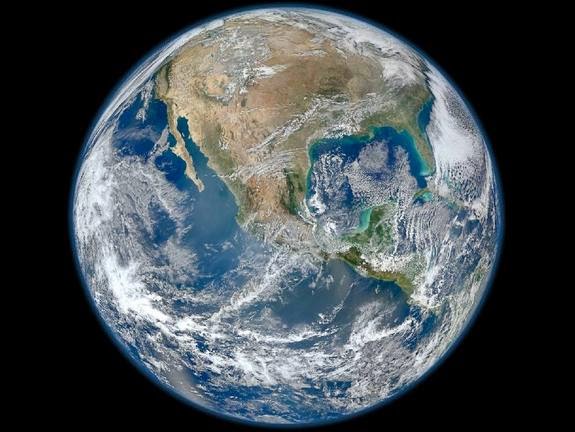 A “Blue Marble” image of the Earth taken from the VIIRS instrument aboard NASA's Earth-observing satellite — Suomi NPP. This composite image uses a number of swaths of the Earth's surface taken on Jan. 4, 2012. Credit: NASA/NOAA/GSFC/Suomi NPP/VIIRS/Norman Kuring

NASA is asking everybody on Earth to help create a new image of the planet composed entirely of selfies taken during Earth Day on April 22.

The aim is not only to raise awareness about Earth and climate change, but also to advertise the five Earth-gazing satellites that NASA will launch this year. That's the highest launch count for the agency in more than a decade.

"Designed to encourage environmental awareness and recognize the agency's ongoing work to protect our home planet, NASA's 'Global Selfie' event asks people everywhere to take a picture of themselves in their local environment," the space agency said in a statement.

My Comment: This is something that I will support.
Posted by War News Updates Editor at 2:00 AM