Going, going.... The UFO suddenly rises upwards as the person filming tries to zoom in
Wing And A Scare: The Mysterious UFO That Shocked Plane Passengers As It Was Filmed Zooming Around Them -- Daily Mail
* The white round object was spotted above Seoul in South Korea
If it’s an April Fool's joke, it’s a few days too late.

A mysterious round white object was filmed whizzing around a passenger plane above Seoul, the capital of South Korea, on April 7.

The clip, which has been uploaded to YouTube, begins with the ‘craft’ at the bottom of the screen, keeping pace with the passenger plane.

But then it speeds up and rises in altitude before zipping off out of shot, just as the startled person filming it tries to zoom in for a closer look.

They're baaaaaack! A Chinese airport reportedly had to divert passenger jets to prevent them from colliding with a UFO earlier this month.

The airport in Baotou, Inner Mongolia kept three flights from Shangai and Beijing circling overhead and shut down for an hour on Sept. 11 until the mysterious bright lights had vanished.

Are UFOs Disarming Nuclear Weapons, And If So Why?


Did UFOs Disarm Nuclear Weapons? And If So, Why? -- Live Science
At an unusual press conference recently held in Washington, D.C., a UFO author and a half-dozen or so former U.S. military airmen asserted that "The U.S. Air Force is lying about the national security implications of unidentified aerial objects at nuclear bases and we can prove it." They claim that since 1948, extraterrestrials in spaceships have not only been visiting Earth but hovering over British and American nuclear missile sites and temporarily deactivating the weapons.

My Comment: I am skeptical .... but these guys are former senior U.S. military airmen, and they should be listened to. Unfortunately .... they have no visible proof.
Posted by War News Updates Editor at 10:00 PM No comments:

The Amalgamated Flying Saucer Club Of America, Headquartered In Los Angeles, Released This Photo, Taken By A Member, Reportedly Showing A Flying Sauce

The Amalgamated Flying Saucer Club of America, headquartered in Los Angeles, released this photo, taken by a member, reportedly showing a flying saucer estimated at 70 ft. in diameter. Bettmann / CORBIS
From Time Magazine:

The year 1969 was a great time for hippies, a bad year for Beatles fans and an even worse year for UFO enthusiasts. Forty years ago, on Dec. 17th, the U.S. Air Force officially shuttered Project Blue Book, the agency's third and final attempt to investigate extraterrestrial sightings and the country's longest official inquiry into UFOs. From 1952 until 1969, more than 12,000 reports were compiled and either classified as "identified" — explained by astronomical, atmospheric or artificial phenomenon — or "unidentified," which made up just 6% of the accounts. Because of such a meager percentage and an overall drop in sightings, officials axed the program and ended the research. So much for the truth being out there.

The UFO world is alive with speculation that China is about to reveal details of startling and detailed footage of an unidentified flying object taken during the solar eclipse on July 22.

Scientists at the Purple Mountain Observatory in Nanjing are reported to have confirmed that they filmed a UFO during the eclipse for 40 minutes. They say that they will spend the next 12 months studying the footage before drawing any conclusions.

Close Encounters... UFOs Made 600 Visits To The UK In A Single Year, According To MoD 'X-Files' An alien ship hovers over the planet in 'Close Encounters of the Third Kind'
From The Daily Mail:

Hundreds of Britons had 'close encounters' with UFOs, according to previously-classified documents
released by the Ministry of Defence today.

The sightings were made between 1981 and 1996 from observers including police officers, fighter pilots and school children. They range from lights in the sky to close contact with aliens with 'lemon-shaped heads', and include detailed analysis on some of the UK's most well-known cases.

A number of public figures have publicly stated that UFOs
are of extraterrestrial origin Photo: NASA
From The Telegraph:

The former NASA astronaut Edgar Mitchell has claimed that aliens exist and their visits are being covered up by the United States government. Mitchell is in good company in his beliefs. Here we highlight 12 other public figures who believe that extraterrestrials may have been visiting our planet over the last 100 years.

Jimmy Carter, US President from 1976 to 1980, promised while on the campaign trail that he would make public all documents on UFOs if elected. He said: "I don't laugh at people any more when they say they've seen UFOs. I've seen one myself."

General Douglas MacArthur, the Korean and Second World War soldier, said in 1955 that "the next war will be an interplanetary war. The nations of the earth must someday make a common front against attack by people from other planets. The politics of the future will be cosmic, or interplanetary".

UFO Myths: A Special Investigation Into Stephenville And Other Major Sightings

"It was the most beautiful sunset I'd ever seen," says Steve Allen, who has seen 50 years of sunsets in central Texas. “That’s what I first thought.”

It was Jan. 8, 2008, and the trucking entrepreneur was sitting around a fire outside the Selden, Texas, home of Mike Odom, his friend since first grade. Then he saw the lights—orbs that glowed at first, then began to flash. “There was no regular pattern to the flashing,” he says. “They lined up horizontally, seven of them, then changed into an arch. They lined up vertically, and I saw two rectangles of bright flame.That’s when I knew it was a life-changing experience.” He watched the lights drift north toward Stephenville, the seat of Erath County. “They came back a few minutes later,” Allen says, “this time followed by two jets—F-16s, I think.” Allen, who owns and flies a Cessna, has seen plenty of military planes over the years. “The jets looked like they were chasing the lights, and the lights seemed to be toying with them. It was like a 100-hp car trying to keep up with a 1000-hp one.”

One of the earliest photographs of an unidentified flying object, this picture was taken somewhere in the United States during the 1920s.

The Passenger Jet That Just Missed Colliding With A UFO 22,000ft Above Kent 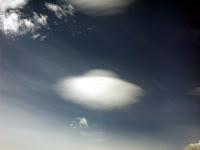 As the captain of Flight AZ 284 began his descent into Heathrow, he saw something alarming overhead.

Shaped like a missile, the object suddenly veered across the airliner's path causing the pilot to shout 'Look out!' as he attempted to avert a mid-air collision 22,000ft above the Kent countryside.

Travelling at an estimated 120mph, it passed less than 1,000ft from the passenger jet before disappearing from radar screens, leaving the pilot and accident investigators baffled.

Secret documents released for the first time reveal that Ministry of Defence staff accept that an Unidentified Flying Object zooming above Lydd caused the nearmiss.

The incident took place at 7.58pm on April 21, 1991, and was investigated by the Civil Aviation Authority and military experts.

Having ruled out the possibility of it being a missile, weather balloon or space rocket, the MoD was forced to conclude that it was a genuine UFO and close the inquiry.

The unexplained close encounter is one of many recounted in military UFO documents released today by the National Archives.

The Alitalia aircraft was on a routine flight from Milan to Heathrow with 57 people on board when the ten-foot long object, which had no exhaust flame, was spotted by pilot Achille Zaghetti.